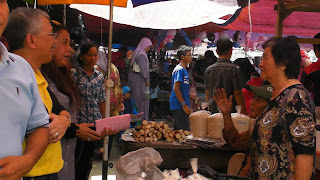 WEDNESDAY SAPP CLC N28 has started its political ball rolling by strolling the town, the first ever with this political style to meet the people in the town.

Many UMNO members were caught by surprise when a group of more than ten people with the yellow T-shirt approached them and entered Kedai Kau Tai one of the oldest Chinese coffee shop in town.

"Many people are watching Sipitang very closely, this group look formidable. If Sipitang people really think that they want change and stop being bullied and coerced by the present administration in Sipitang, this is the time to consider," Awang Salleh said, who is from Sipitang who casted his vote in Pekan Sipitang in the last general election.

The group started their walkabout from the Tamu Ground, fish market and to the entire old shop row.

According to Hj Amdee, he meant it serious business, more show to come and we can't stop the people from wanting to change for better of their political and democratic updates, its their rights and he is here to support them. Enough is bullying game by leaders who are rooting people's mind, he said.

SAPP CLC N28 is having its Malam Mesra in conjunction with its Annual General Meeting Saturday, 26th November, 7:00 pm to be held at SFI Motel Sipitang.