MALAYSIANS GETTING RIPPED OFF 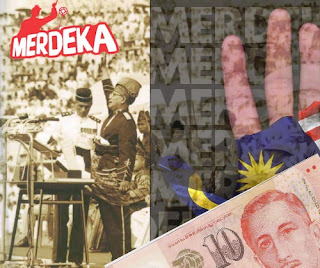 WHEN Tunku Abdul Rahman decided to expel Singapore from the Federation of Malaya leading to the Independence of Singapore on August 9, 1965, the world did not expect this tiny island Republic with a population of 1.8 million then to stand tall as one of the original Four Asian Tigers, along with Hong Kong, South Korea and Taiwan 46 years later. Well, this Lion City has certainly ventured forth roaring all the way with a lion heart.

How does one measure the success of a country? To the people, it is reflected in their overall standard of living. Not every country is lucky enough to have a team of intelligent people whose passionate objectives drive them to make their country a better place to live – for everyone. Singapore is one such country. Today this island republic has one of the highest standard of living in South East Asia.

Which Malaysian could imagine that some 46 years after the split, Singapore’s exchange rate to the ringgit would hit a dizzying rate of RM2.41 (Nov 11, 2011)? August 1972 was the last time that the SGD (Singapore Dollar) was almost on par with the (RM) ringgit at SGD100:RM100.10. For an average wage earner in the Lion City making SGD2500 a month, going for a 10 days holiday to the US or Australia or Europe once a year is a relatively small matter.

What happened to Malaysia? In 1965 when Singapore was expelled, Malaysia had everything that the island republic glaringly lacked – ample land, a plethora of natural resources, an operating government, and 9.3 million people.

Unfortunately, in the 46 years that has come to past, Malaysia has been bogged down by a number of issues which are clearly distracting the government from doing what it is supposed to be doing.

The ruling government (UMNO) in Malaysia is debating whether education in English would be significantly beneficial to the rakyat, the opposition PAS’ vehement stance in wanting to forcibly implement the hudud laws and banning Elton John from performing in Malaysia because of his sexual orientation, and the Obedient Wives Club’s proposition that Muslim women should be obedient and strive to approach sex with their hubbies not just on a physical level but on the higher spiritual realm.

There are also questions posed to DAP’s national chairman Karpal Singh by MCA’s leader Datuk Seri Dr. Chua Soi Lek whether a non-Muslim should first convert to Islam if they wanted to be deputy prime minister should Pakatan become the ruling government. These are just a handful of endless annoying issues which UMNO has had to deal with on a daily basis.

In 2011 Singapore’s population stands at 5.18 million (63% are Singaporean citizens while 37% are permanent residents). Malaysia’s population as at July 2011 is 28.73 million. Without getting into advanced mathematical calculations, one would deduce that economies of scale would be more achievable in the country that has 28.73 million people versus 5.18 million. This is not the case.

The cost of living is relative to the ability to earn. Lets establish the value of currency in terms of the wage rate (Malaysia does not have a Minimum Wage rate yet). In Singapore the average general worker such as a merchandiser in a supermarket /department store or the cashier serving you at Mc Donald’s earns SGD5.50 – 6.00 per hour. In Malaysia similar positions start at RM4 – 6 per hour.

But take a look at how much things cost in Malaysia. A kopi si peng costs SGD0.90 to SGD1.20 in clean kopi shops/food courts in Singapore while it costs RM1.80 to RM2.00 in Malaysia. A Chinese roasted duck costs SGD18-25 each . In Malaysia, at the market rate of RM48 per bird, eating roasted duck is a luxury.

As my niece, a 2 year Sunway College graduate with an Accounting degree and ACCA cert is fond of saying, “A person earning peanuts (SGD peanuts, OK) in Singapore can still afford to buy Peter Pan Honey Roasted Peanut Butter imported from the US. A Malaysian earning peanuts in Malaysia can’t even afford to smell any peanut butter.” She adds, “SGD10 in Singapore goes a lot further than RM10 in Malaysia!”

Needless to say, Malaysia has already lost her to the Lion City – talk about brain drain. More than 13 young Accounting graduates from her circle of friends have eagerly taken the same path.

How is it that the cost of so many basic foods and day to day consumable items end up being so much more expensive in Malaysia? Malaysian politicians need to start talking in a meaningful language to the people. For a start, they can talk in terms of bringing down the cost of foods and consumables in Malaysia while striving for a decent standard.

The rakyat will surely want to listen to the party that can talk sense about making their RM10 go further than at its current limpy and lethargic rate. It would be nice for average income earning Malaysians to be able to afford US made Peter Pan Honey Roasted Peanut Butter.

Forget the hudud laws for now. Being obedient wives is interesting…. but it’s not an urgent matter. Lets not fret on this issue. Why must a capable non-muslim candidate convert to Muslim to be the Deputy Prime Minister?

Would converting to Muslim make the candidate a better Deputy Prime Minister? Finally, do let Elton John dazzle the Malaysians for just one nite; he is not a terrorist. He is truly an accomplished, world class musician and entertainer.