IS UMNO THAT PATRIOTIC? 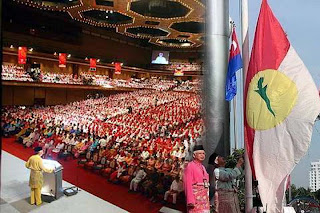 Yahya took the opportunity to blurt out such extreme comments against him as, “To the opposition like … Jimmy Wong, the budget today is meaningless … no matter how much the budget is it is incorrect… it is opposed in a way that is membabi buta (blindly)… when the opposition talks about Sabah, everything about it is bad but when they talk about other states such as Penang and Selangor, it is all good.”

“People like these are unpatriotic. I hope the people would be aware of the opposition’s habit and objectives because they only aim to rule but do not know what to do if they achieve it. They should not be given any chance to rule the State because it would be like releasing a dog from captivity.”

My first impression of this outburst is that one state BN leader has lost his cool in dealing with the opposition in the august house. Yahya lost his own dignity as a senior leader by making such childish remarks.

He clearly believes that the opposition leaders are a bunch of idiots who are talking blindly (like pigs?) and totally unfit to rule the state, i.e. they wouldn’t know how to rule and they will behave like ungrateful dogs! Two derogatory references to dirty animals (pigs and dogs) are mentioned by Yahya which was a strong hint at equating them to poor Jimmy.

But never mind that, because people call each other by animal names all the time, e.g. pig, dog, monkey, snake, serpent, fox, flying fox, chicken, buffalo and so on. But what irks me most is that the BN leaders have gone into the bad habit of calling leaders of the opposition as being unpatriotic.

Those who criticize the BN government abroad are branded as smearing the name of the country, even trying to destroy the country. As I remember, Tengku Razaleigh Hamzah was the first to be accused of doing this when he revealed the corruption of the BN under Umno, who as Ku Li put it, “awarded projects to themselves.”

It didn’t matter that what he said was true; he was highly demonized as unpatriotic and anti-national. Thereafter if was Datuk Seri Anwar Ibrahim, Nurul Izzah, Raja Petra Kamaruddin and others.

One minister recently accused the Indians and Chinese unpatriotic for not being interested in joining the security forces. It later turned out to be a terrible blunder for which the minister had to publicly apologize. Now it is Jimmy Wong who is an unpatriotic political animal for criticizing the state budget!

But I would like to confront Yahya and ask him point blank: How patriotic do you think the BN/Umno leaders are towards Sabah? I think it is the 14th year that we have been having a deficit budget. How come we never know how much of the budget allocation had been spent every year? How much pf the new budget is carry-forward amounts for delayed projects?

How patriotic are those leaders who go overseas to purchase expensive handbags, multimillion-dollar rings, or makes purchases of submarines, military helicopters and whatnots and try to get hundreds of millions in kickbacks? How patriotic is Umno Sabah for taking all the top posts of the Sabah BN Committee, for ignoring the people’s endless calls for an RCI on the illegal immigrants? Where was the patriotism of Umno when it set into motion a secret program to legalize illegal immigrants by giving the MyKads overnight in what is now famously called ‘Projek IC’?

How patriotic is Umno Sabah for supporting the cabotage policy which for years have been causing the high inflation in Sabah, hence killing the consumers in the state, while it continues to pretend not to hear all the many years of protests against it? What about the unending grabs of NCR lands against natives by big companies and with no intervention from Umno leaders?

And what wonderful patriotism Umno Sabah can talk about when it ignores the call for a White Paper on the huge, huge, unconscionable Saham Amanah (SAS) scandal?

And if Umno is such a great planner in reviving the economy of the state, why did Sabah become the poorest state beginning with Umno’s the takeover of the state in 1994? Why has one company connected to a senior BN leader taken most of the road building projects in Sabah?

And why are the people complaining about construction projects being usually overpriced by up to 100% their actual costs? Hey, I can go on a whole day with these questions.

I have said it before that the opposition leaders are not idiots who simply fire at the BN ‘membabi buta’, but we watch whatever the BN is doing with the sharp eyes of the hawk. We are the sober ones because we are not the ones drunk with power and corruption!

We are fighting the abuses power by the BN because we love our state, because we want to defend the people of Sabah from the clever political manipulations, to reverse the negative trends which are slowly killing the state.

As for Penang and Selangor, they have made tremendous progress in improving the governance of these states. Even the Auditor General made a glowing commentary on the transparent and effective leadership of Penang by Lim Guan Eng who by the way, doesn’t have a mansion and travels on planes by economy class on!

Here it's proven that the opposition leaders and governments are very, very patriotic indeed, unlike some leaders who are behaving like robbers who bring down their own states with their misdeeds.