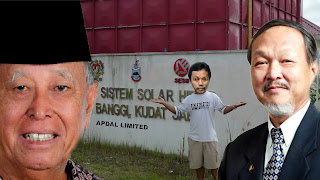 Harris, who spoke to the media on the sidelines of a court hearing here Friday, said the detailed accusations made by DAP on the front page of Daily Express on Nov. 13 were glaring and as clear as crystal that there are definitely wrongdoings on the part of the Ministry.

"The reply given by the Rural and Regional Development Ministry's Head of Corporate Communication Unit that all tender evaluations are going through the Tender Evaluation Works Committee is not satisfactory," he said.

"It claimed to have followed all tender procedures and the guidelines of the Public Works Department, but how can it explain that a project such as electricity for Pulau Gaya where the real cost may be around RM25 million but the tender awarded was RM100 million," he asked.

There are many others as detailed in the papers which clearly showed the value was upped many times, he said, claiming he also received many complaints from rural folk that despite the Federal Government implementing billions of ringgit worth of rural projects, the people do not benefit much from the said projects economically and financially.

"More often the projects were introduced for the sake of contracts and most of them are of low standard," said Harris.

He said he will organise a team of people comprising concerned citizens to visit as many rural projects implemented by the Federal Rural Development Ministry, particularly the Pulau Banggi Hybrid Solar Power System sometime between next month and January next year.

He said he has been told that the said solar power system installed at Pulau Banggi was already almost 50 per cent not working because of poor maintenance.

"This has induced the villagers to sell these panels and the associated accessories to buyers outside the country É surely this is just too bad," he said.

Harris also called on the Federal Government to take seriously any complaints exposed either by members of the Government or the opposition.

The stage of corruption and the projects implemented below standard have gone too far and unless the Federal Government becomes serious in its efforts to reduce or stop corruption and wrongdoings Malaysia will become a failed country as stated at least twice by Minister in the Prime Minister's Department Datuk Idris Jala, he added.

DAP Kota Kinabalu MP Hiew King Cheu had said that in most cases it is the group of same people applying for the multi-million-ringgit projects with little difference in the pricing but under different companies, thus giving the impression that many interested parties had tendered for the projects.

Malaysian Anti-Corruption Agency (MACC) urged Hiew to lodge an official complaint, to which Hiew said he would submit the relevant documents. (DE)