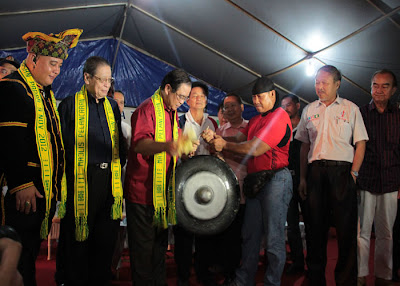 KOTA KINABALU: Former Tuaran MP Wilfred Bumburing said his Sabah Reform Movement or Angkatan Perubahan Sabah (APS) will not disband and merge with PKR but would instead focus on a unified Sabah opposition grouping.

Bumburing, who won the Tamparuli state seat on a PKR ticket in the May 5 polls, said that APS leaders had decided that for now the Pakatan Rakyat friendly movement would remain an NGO.

Bumburing said APS would initiate discussions with Sabah-based opposition parties and NGOs about forming a united opposition front which the movement believes was reflected by voting trends during the general elections.

Local opposition leaders in the state like the former Tuaran MP are just coming to terms with their near wipeout in the elections with voters opting for the more united Pakatan Rakyat alliance rather than individual Sabah opposition parties.

Bumburing has been the first to bravely address what many had said was obvious and that a divided opposition was no force in facing the might of the Umno-led ruling Barisan Nasional.

Local opposition leaders like SAPP’s Yong Teck Lee and State Reform Party’s Jeffrey Kitingan were caught by surprise by the overwhelming swing to the ‘peninsula-based’ opposition coalition by voters they had assumed would retain the Sabah bias they had displayed in past elections.

They are now staring at irrelevance for the immediate future based on the performance of the Pakatan Rakyat based parties.

The emerging picture is that only unity at local level can save them from being swamped.

Bumburing said the 13th general election had also shown that winning the popular vote was not enough to topple the BN especially when the opposition vote was split between various parties.

Coming together as a coordinated team, he said, would place the opposition parties in a better position as an alternative to the ruling coalition of BN.

On other issues brought up during APS’ meeting last Wednesady, Bumburing said, reports relating to irregularities in GE13 were also presented.

He said APS would decide in due cause on whether to file election petitions.

He said though the claims of irregularity were “backed with very solid evidence”, APS would consult its panel of lawyers on the matter before making any decision.

Among the electoral issues that were highlighted, he said, was the quality of the indelible ink used – which was easily washed off – and allowed for multiple votes by the same person.

“There was also an incident where a ballot paper cast in Tuaran ended up in Putatan and this was discovered during the counting process. We have strong evidence of this,” he said.

As for his decision to abandon the United Pasokmomogun Kadazandusun Murut Organisation (Upko) and BN, Bumburing said he did not regret joining the opposition despite losing his MP seat to the BN’s Wilfred Madius Tangau, the Upko secretary-general.

“I think I can walk tall in town. We never regretted what we have done,” he said.

In the just concluded general election the former Barisan Nasional member of Parliament for Tuaran defended his seat and also went for the Tamparuli seat.

Beside Bumburing, former senator Maijol Mahap who was a Upko vice president also quit the party to form APS..

Mahap contest on a PKR ticket for the Kota Marudu MP seat but lost narrowly to PBS deputy president Maximus Ongkili. (FMT)
Posted by sabahkini.net at 09:17