SABAH AN ‘EXPENSIVE’ BUT USEFUL LESSON 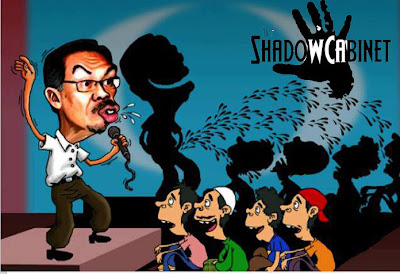 SHADOW ....Opposition forms shadow cabinets in Sabah and Sarawak, begins readying itself for state polls in 2016 and next GE14.

KOTA KINABALU: Smug from having won just over 51% of the popular votes in the recent general election, Pakatan Rakyat is re-aligning its strategy  and focusing on Borneo.

“We are not waiting till the last minute. Our targeted youth are between 17 and 21 years old because they will reach the eligible voting age of  21 years in four to five years time.

“There will be at least another three million more unregistered but eligible voters who missed their chance to vote in GE13.

“What we are looking at is another new six million voters in GE14. These group of voters will determine whether there will be a change of government in GE14,” said Wong, who is also Likas state assemblyman.

Wong’s comments backs party advisor Lim Kit Siang’s latest statement that the coalition had learnt an expensive lesson in Sabah in GE13 and would re-strategize its battle plans to win more seats in Sabah and Sarawak in GE14.

In the recent May 5 polls, although Pakatan only won three parliamentary seats, it did remarkably well in winning 11 state seats in Sabah.

This despite the months of puerile spewing by  its leaders, internal sabotage and widely felt inconsistency with PKR and DAP’s stands in the months preceding the polls.

Jeffrey ’s two-year long ground breaking campaign to inform Sabahans about the 20 points and Malaysia Agreement while rekindling an ‘old flame’ within the KDMs failed to follow through in terms of structure and strategy –vital in any war.

In the end the Borneo Agenda gave Pakatan  a leverage  into state politics which in all honesty it did not really have to begin with.

All Pakatan partner PKR did was to add “tukar” to the “inikali lah” and allowed its de facto leader Anwar Ibrahim’s charismatic persona do the work. And before long Sabah was awash with “tukar, ini kali lah” drowning STAR.

To counter if not contain its bickering Sabah-based party ‘warlords’  Anwar brought in Lajim Ukin and Wilfred Bumburing and propped them up despite widespread discontent which divided the party.

Anwar handed over 10 parliamentary seats to Lajim’s PPPS and Bumburing’s APS movements. Both movements’ candidates stood under the PKR banner but failed to win a single seat. In the end only Lajim and Bumburing won their Klias and  Tamparuli seats respectively.

The investment did not pay off in seats but it did help with the branding Pakatan and its partners.

Sabah PKR and DAP took a leap securing 11 state seats from one in 2008 general elections.

It was a good job,  considering both Sabah and Sarawak are decades behind West Malaysia in terms of socio-political and economic empowerment.

One must remember that West Malaysia’s political reformation was seeded in the 1990s and spilled over in 2008 when the opposition wrested five states from BN.

Sabah and Sarawak were jolted out of their slumber only in 2008, when to quote PACO’s Anne Lasimbang “we realized we could shake Kuala Lumpur (Putrajaya).

“When PBS toppled Berjaya, we were young, ready to fight. But after winning the battle ( PBS took over the government) , we only then realized the power was with (the) federal (leaders). The rest is history as you know it,” she told FMT days before the GE13.

Now that the heat of anger and denial over an alleged fraudulent GE13, acceptance is setting in with the Pakatan camp. DAP and PAS at least are showing signs of moving on.

In Sarawak, the coalition is in the midst of forming its own shadow cabinet to stalk the performance of state ministers. In Sabah Lajim said they would do the same.

Sarawak is due for state election in 2016 at the latest.

Pakatan is aiming to up its score from 15 to at least 25 in the next state elections.

If 2011 was tough, the next polls will be an even tougher one for the opposition in Sarawak.

A Chief Minister Taib Mahmud-instigated 300%  hike in salaries for state assemblyman, assistant ministers and ministers was aimed at ensuring elected representatives stayed with BN and triple their efforts on the ground.

It was also meant to contain a speculated internal coup within PBB to unseat Taib and to send Putrajaya a warning not to touch Sarawak.

Lim, who had whizzed in and out of Borneo, particular Sabah, in the weeks before GE13  said Pakatan was drawing up plans for East Malaysia, where it will be a “double battle”.

Reviewing Pakatan’s GE13 performance in Sabah, Lim said if the country’s electoral boundaries had followed the “one-man, one-vote, one-value” system, their candidates would have wiped out BN’s two-thirds majority in the state assembly.

He said with 55.78 per cent of the total votes cast for all 60 state seats favouring Pakatan, Barisan Nasional would have only secured 34 seats instead of 48 seats it now has.

Pakatan partners contested all 60 state seats and collectively polled 248,185 votes or 32.36 per cent of the total votes cast. This, Lim said should have won them 20 seats instead of just 11 seats.

STAR won only one seat – Bingkor – through Jeffrey  although it contested in 47 constituencies. Another local party led by former Sabah CM Yong Teck Lee – Sabah Progressive Peoples Party (SAPP) – was wiped out and garnered only 3.69% of the total votes casts in GE13 in Sabah.

Lim said had there been straight fights Pakatan would have won four more parliamentary and eight other state seats.

The GE13 in Sabah was a well learnt lesson, albeit an “expensive one” said Lim but it was not the end.

The GE14 is not too far away and change has begun to engage the psyche of people in Sabah and Sarawak.
Posted by sabahkini.net at 10:50