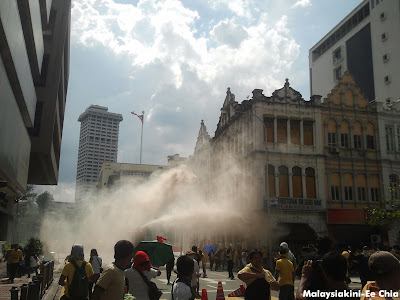 POLICE have fired tear gas cannisters and water cannons at demonstrators who pushed through a barricade in front of the Kuala Lumpur City Hall (DBKL) leading to Dataran Merdeka, resulting in chaos on the streets.

Police fired as far as the DBKL building across from Jalan Parlimen, and managed to break up the crowd at Dataran who fled helter-skelter to avoid the barrage. Some appear to have been arrested.

Police are now headed down Jalan Tun Perak and firing tear gas at another group at Masjid Jamek.

Orders are being given for riot police to continue shooting water cannon and tear gas at the dispersing crowd.

Observers from law activists LoyarBurok said: “Tear gas was fired without warning deep and direct into the crowd.”

The crowd near Lebuh Pasar Besar have now pushed down the barricade, but around 30 riot officers armed with batons, shields and gas masks block their path to Dataran Merdeka.

Riot police then fired water cannons and tear gas at them after they refused to heed orders to disperse.

But the trucks have since turned around for Dataran Merdeka, and the group has since resumed down Jalan Raja Laut toward the historic square.