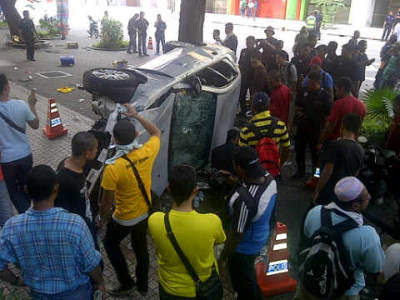 The Bersih 3.0 protest which had started at about 2pm on a peaceful note, ended ugly when demonstrators broke through the barb wire and barricades at the Jalan Tuanku Abdul Rahman/Jalan Raja junction to get to Dataran Merdeka at about 3pm.

Tens of thousands of demonstrators had earlier gathered at various spots of the city such as Jalan Sultan, Jalan Petaling, Central Market, KLCC and Brickfields in a carnival-like atmosphere to take part in the rally to fight for fair and clean elections.

Authorities insist the elections will be free and fair, rejecting activists' claims that the Election Commission is biased and that voter registration lists are tainted with fraudulent names, AP reported.

Authorities had obtained a court order that made Dataran Merdeka and its surrounding roads off limits from midnight Friday till May 1 and had offered Bersih organisers alternative venues.

The demonstration remained peaceful for several hours, prompting organising co-chairman Datuk Ambiga Sreenevasan to declare it a success and ask people to head home. Some reports suggested that the Bersih rally had been 'hijacked' by Opposition politicians for their own ends.

Riot cops fired tear gas and water cannons at several other places when the demonstrators refused to disperse. Reports said three demonstrators were injured while about 60 were arrested.

Police said one protester snatched a pistol from its personnel during the chaos, but the weapon was later recovered.