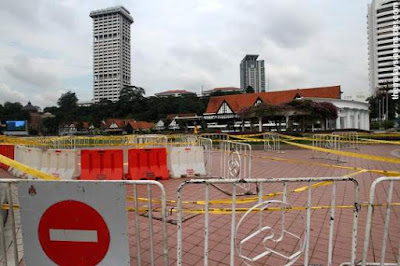 DATARAN Merdeka will be closed off to the public for the next 48 hours from 6am tomorrow as the authorities move to prevent the Bersih 3.0 sit-in in the historic square this Saturday.

Kuala Lumpur City Hall (DBKL) issued the order after unconfirmed reports said  that police have obtained a court order today preventing the use of Dataran Merdeka for a rally.

The move against the electoral reforms movement is seen as a sign that the hawks in Putrajaya have won the day despite their confidence that the rally has no traction.

KL mayor Tan Sri Ahmad Fuad Ismail said in a statement that the restriction will be enforced based on Local Government (Dataran Merdeka) (Federal Territory of Kuala Lumpur) By-Laws 1992 and Section 65 of the Local Government Act 1976.

He said the restriction will be lifted at 6am on Sunday morning.

DBKL has already barricaded the historic square in the capital city but the electoral reforms group have said it will gather there this Saturday as time was too short to consider other venues.

Putrajaya and DBKL have offered several stadiums, including Stadium Merdeka which was ironically cordoned off during last July's Bersih 2.0 rally.

The police have taken a hands-off approach towards the latest rally with DBKL taking the lead role as it runs the square. The city authorities have just evicted a group of activists calling themselves Occupy Dataran this week, two weeks after they set up a daily camp there.

A similar order last July galvanised a larger turnout in the capital city, with organisers saying nearly 50,000 gathered to walk past road blocks and policemen who shut down the city. But police said only 6,000 took part in the rally and nearly 1,700 were arrested.

Another such order this weekend could push more support for Bersih, which launched the protest as some of their demands were not met when a parliamentary select committee (PSC) made 22 recommendations to reform the electoral process.

The bipartisan panel was formed following the July 9, 2011 rally for free and fair elections that saw tens of thousands flood into the streets of the capital.

The Najib administration was widely condemned for a clampdown on the demonstration in which police fired water cannons and tear gas into crowds during chaotic scenes that resulted in over 1,500 arrested, scores injured and the death of an ex-soldier.

Bersih’s eight demands are: a clean electoral roll, reform to postal voting, the use of indelible ink, a minimum campaign period of 21 days, fair access to the media, the strengthening public institutions, a stop to corruption, and an end to dirty politics.

PR has pledged its full support for this Saturday’s rally, promising to mobilise thousands of supporters to attend the event.
Posted by sabahkini.net at 08:01