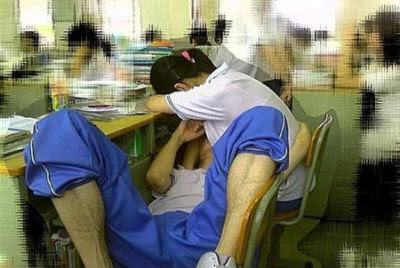 A MIDDLE school in East China has issued a list of rules aimed at preventing puppy love among students. In a recent notice, Yueqing Yucai School in Zhejiang province banned youngsters of the opposite sex from talking alone in secluded areas, such as in dark corners or under trees, and from giving each other expensive gifts.

Holding hands, hugging and kissing are strictly forbidden, while boys and girls are not allowed to walk side by side on the playground.

"We hope all of our students can stay rational and restrained when it comes to adolescent love so that they can be entirely devoted to their studies," the notice read.

It warned that falling in love at an early age disrupts academic study, can cause physiological and psychological harm, and produces no result.

Any student found breaking the rules will be punished and their parents will be informed.

"Puppy love is more prevalent these days and it's hard to deal with," Li Chunlian, director of the school's general office, told China Daily.

"We hope these rules will prevent students from being engaging in it too early."

Most parents with children at the school are in support of the new rules, according to Li, who added that many had been calling for measures to prevent adolescent romances.

"We also asked students for suggestions before devising the rules," she said.

"Some said they began their relationship after strolling with a classmate on the playground, that's why we added it into the rules."

Xiong Bingqi, deputy director of the 21st Century Education Research Institute, a non-governmental policy research group, however, said schools should guide students' behaviour, instead of simply trying to pose restrictions on their activities. (China Daily)
Posted by sabahkini.net at 15:15