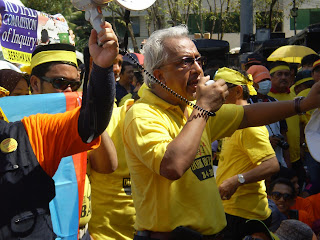 ABOUT 2,000 supporters of Bersih Sabah 3.0 yesterday made their way to Padang Merdeka here to call for clean and fair elections despite an official city event being held at the same field.

However, unlike the violence-marred protest in the nation’s capital, the gathering went on peacefully with the large crowd occupying only a small area on one side of the field, where the Safe City Programme organized by City Hall was held.

The Bersih 3.0 supporters had earlier gathered at Suria Sabah Shopping Mall and Asia City Complex as early as 9am. 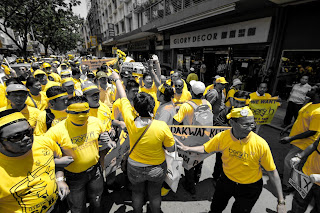 The two groups, consisting of Bersih Sabah (Coalition for Clean and Fair Elections) and Himpunan Hijau, then made their way to the courthouse where they gathered around 1.15pm before marching together to Padang Merdeka with banners and placards calling for a cleaner electoral process.

However, the crowd obeyed instructions from the policemen and City Hall officers not to march to the centre. 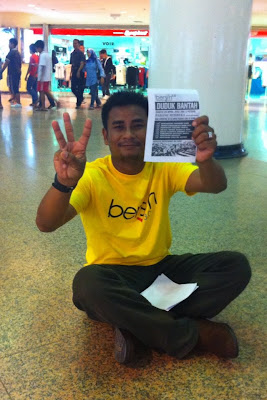 They sat and sang the national and state anthems and the Bersih song before listening to speeches by leaders from the movement and opposition parties.

No arrest or unwanted incident occurred during the gathering until the crowd dispersed around 4.30pm.

“Everything was orderly,” he said. 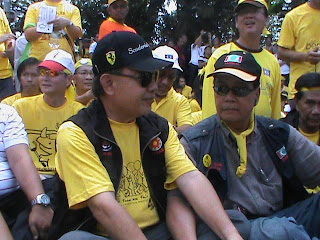 City Hall director-general Datuk Yeo Boon Hai said the Safe City Programme had been planned a long time ago before the Bersih 3.0 campaign.

“The crowd that came in did not really affect our programme.

“We did not invite the group specifically but it is a government programme and open to everyone,” he said, adding that the Safe City Programme was held to showcase the response and capabilities of the authorities such as the police, Fire and Rescue Department, Civil Defence Department, City Hall and the National Anti-Drugs Agency. 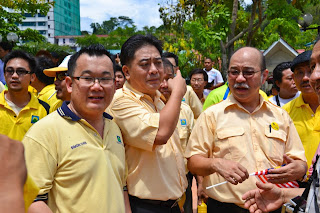 Police had mounted numerous roadblocks at various points in the city since Friday ahead of Bersih Sabah 3.0 for security reasons. (BP)
Posted by sabahkini.net at 09:26