NO ROOM FOR LAZY YBS 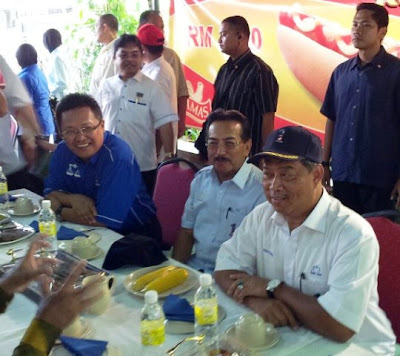 CHIEF Minister, Datuk Seri Musa Hj Aman issued a stern warning yesterday that there is no room for lazy Yang Berhormat in Barisan Nasional. He said, “If you are lazy to work for the people, do not even dare to think of becoming a candidate.”

The Sabah BN chief also reminded members of parliament and assemblymen that being a candidate and a leader is not a privilege.

“It is a mandate of trust given by the people that we will help them, work hard and ensure their needs and welfare are protected.

“But being a YB, you have to accept the fact that sometimes you have to leave the spouse, children or grandchildren behind …  but it is all in the name of carrying out our responsibilities as leaders, for the good of the people, State and nation,” he said.

Addressing the thousand of people who thronged SMK Narinang in Taginambur, some 20 kilometres from here, for the meet-the-people-session with Deputy Prime Minister Tan Sri Muhyiddin Yassin, the Sabah Umno chief also expressed hope for the people not to be influenced by rumours and lies spread by the opposition.

“It is all ‘auta’ (lies). The BN government has pumped in allocations annually without fail to ensure the people’s needs and wants are met. We are working hard and know what they want.

“We are lucky that the Prime Minister and the Deputy Prime Minister are kind hearted people. We are working hard for the good of the people, and I believe the people would pay back the deeds by showing us their continuous support, especially come election time,” he said.

Musa said that the Sabah BN has shown good track records and it will continue to work for the people, thus calling for their undivided support in the coming 13th general elections.