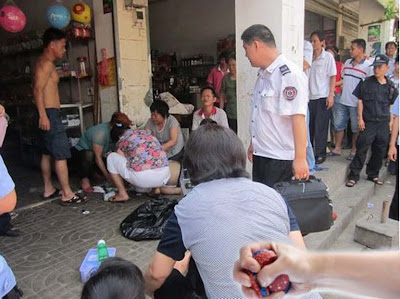 TRAGIC.....The scene of the tragic incident.

A 42-year-old shop owner in Hainan was killed after a woman squeezed his testicles. All this happened over a parking dispute. The 41-year-old woman wanted to park her scooter in front of the man’s shop and the man told her she could not do so.

An argument ensued and soon got physical, with the woman grabbing the man's testicles and squeezing them …hard and long.. He collapsed and was dead.

Neither the paramedics or doctors in the hospital he was rushed to could do anything for him. (Agencies)