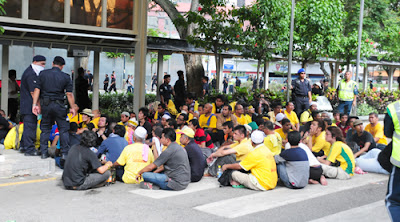 SOME 388 protesters have been arrested as of 8pm at the Bersih 3.0 rally for electoral reforms here today. The number arrested is far less than the 1,667 detained in the Bersih 2.0 rally in the city held in July 9 last year.

It is understood those detained are expected to be sent to the police training centre Pulapol where legal aid lawyers are already awaiting their arrival.

“None of those arrested have been brought to the police station yet,” Bar Council committee member Syahredzan Johan told The Malaysian Insider when contacted.

“However, detainees have access to their phones, and from those whom we have contact with, we have been told that they are on their way to Pulapol.”

However, lawyers are “still waiting to be let in” as police have insisted on seeing full documentation.

“The police are just looking at us,” he said.

One of the last few detained was Bersih steering committee member Wong Chin Huat, who was picked up at about 7.30pm.