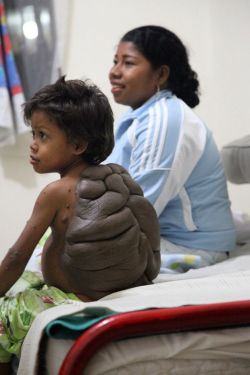 MOLE.....The gigantic mole on the boy's back.

A YOUNG lad branded 'turtle boy' because of a huge shell-like growth on his body is finally free of the birthmark thanks to a British surgeon.

Little Didier Montalvo suffered from Congenital Melanocytic Nevus, which meant a mole grew so large it almost entirely covered his back.

The six-year-old, from Colombia, was teased and banned from going to school because of the growth.

Locals in his village feared he had been cursed by evil forces because he was conceived during an eclipse.

And mum Luz could not afford to pay for surgery to help rid her son of the birthmark blighting his life.

But when plastic surgeon Neil Bulstrode, from Great Ormond Street Hospital, in London, heard about the boy’s plight, he and his team flew to capital Bogotá to operate on him.

They eventually managed to remove the mole with a series of skin grafts.

Mr Bulstrode said: "Didier's was the worst case I had ever seen. Effectively three quarters of the circumference of his body was affected.

"Obviously he has had to go through a number of painful operations, but we feel it was worth it. It’s great to see the photos of how Didier is getting on now. I'm really happy with how things have healed."

Didier had said: "I want to grow up. But the mole won't let me."