SIT-IN ENDS ON A PEACEFUL NOTE 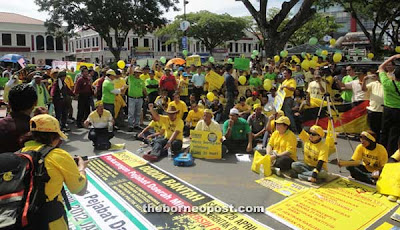 SIT-IN.... Some participants of Miri Bersih 3.0 at the carpark of Miri Resident’s Office.

ABOUT 300 people participated in the Miri Bersih 3.0 sit-in in the carpark of Miri Resident’s Office in the centre of town. The protest coinciding with the nationwide protest called by Bersih movement started about half an hour early, ending early with most participants leaving for home by 3.30pm.

“This is the first time many people took part in a Bersih protest; many could not make it, perhaps it will be bigger and better next time,” said Baram PKR chairman Harrison Ngau when met at the sit-in.

The protest was peaceful with participants treating it like a carnival with yellow and green balloons; the turnout was lower than the 1,000 people expected by organisers.

While many protesters wore yellow, some wore green, while PAS Miri contributed Unit Amal men in red uniforms to keep order among participants.

Several speakers talked on various issues protesters wanted addressed by the government, while protesters were satisfied to be able to voice their messages in public. The weather was fine but hot which could be why participants left early.

Protesters had sought electoral reform in the country via Bersih 2.0, but this time protesters have more reasons to join Bersih 3.0 in protest with groups representing anti-Lynas, anti-Baram Dam, and Save Rivers Network.

The protest ended without any incident, with some traffic police directing traffic near the venue. (theborneopost)
Posted by sabahkini.net at 08:57