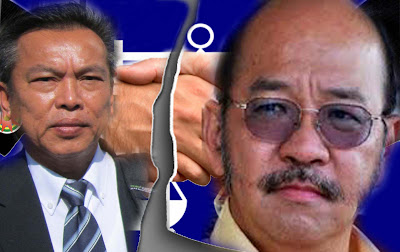 STATE Reform Party (Star) Deputy Chairman, Daniel John Jambun wants the Sabah Progressive Party (Sapp) to explain what 'topping Barisan Nasional' means if the party is sincere in the opposition, as claimed, and has no plans to return to the ruling coalition.

“SAPP Deputy President Eric Majimbun has asked a rhetorical question on why they (Sapp) should lose all their privileges by leaving the BN,” said a perplexed Daniel. “At the same time, the party claims in a contradiction in terms, that its return to the BN is a figment of my imagination.”

The Star deputy chief was commenting on a statement issued by Eric in the local media on Sat.

If we accept Sapp’s statement at face value, added Daniel, “we can give them the benefit of the doubt for being in the opposition but not before they explain what toppling BN means in their language”.

“Sabah and Sarawak are caught between the devil (now) and the deep blue sea (future),” Daniel cautioned Sapp. “The 2008 General Elections has opened up a historical window of opportunity for Sabah and Sarawak to get a better deal in Malaysia.”

Daniel reminded Sapp that “toppling BN” in Sabah and Sarawak won’t be that easy as claimed by the national opposition as many people in the two states are locked in the mind-set that the known devil (BN) is better than the unknown angel (PR).

Sapp, stressed Daniel, has a lot of explaining to do on its “sincerity in the opposition” after going behind Star’s back recently and sowing up a seat-sharing pact in cahoots with de facto Parti Keadilan Rakyat (PKR) chief Anwar Ibrahim.

He said that he looked forward to receiving an official reply to the letter that Star sent Sapp President Yong Teck Lee recently, seeking clarification on various issues.

“I was advised by our chairman, Jeffrey Kitingan, to prepare, sign and send the letter to Sapp after we took an official position,” said Daniel. “It’s pointless therefore for Eric to split hairs on the letter and wonder whether it reflects Jeffrey’s position as well.”

The letter, reiterated Daniel, is the official position of the party based on its vision and mission and not any one person’s view.
Posted by sabahkini.net at 17:22