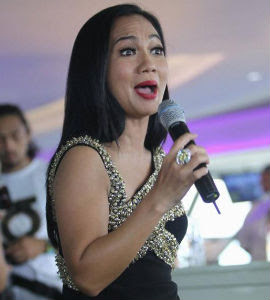 "Anything that's man-made has life span. You may look good after the botox but what happens years down the road?"

The 47-year-old added that she exercises, eats right  and does pilates to keep slim and maintain her stamina.

Sheila said this during songs at a performance at the revolving restaurant Atmosphere 360, where she sang her monster hits and took pictures with secretaries.

She sang the hits Dia, Lagenda, Antara Anyir dan Jakarta, Sinaran and a cover of the standard Can’t Take My Eyes of You.

It was more of a casual sing-along in the company of friends than a full-on performance.

Besides the botox question, another secretary asked what her husband Acis calls her.

“When we were dating it was baby, then soon it was babe. Now it’s just mum!”