FOCUS ON THE PENINSULA 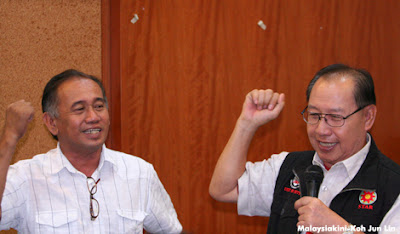 PAKATAN Rakyat should focus on winning seats in the peninsula in the coming general election and support the local parties in Sabah, the Sabah State Reform Party (Star) chief Jeffrey Kitingan says.

Otherwise, Jeffrey said, it would be like Umno, which said has been ‘colonising' Sabah.

"Secondly, Pakatan Rakyat already promised to respect the autonomy of Sabah and Sarawak... It would be contradicting itself if it goes there to contest seats," he said at a talk in Kuala Lumpur last night.

Jeffrey said if this was done, the Sabah and Sarawak-based parties would support Pakatan Rakyat in its bid to form the federal government.
The former PKR vice-president also said that the peninsula already has 165 of the 222 parliamentary seats, leaving Sabah and Sarawak under-represented.

"We have so few (seats). If any of these are taken by the peninsula-based parties for their political games (in Putrajaya), how are we supposed to defend our rights?" he told the audience of about 80, many of whom were apparently Sabahans based in Kuala Lumpur.

Asked by a member of the audience what would be done if Pakatan Rakyat did not agree to cooperate and allowed its member parties to contest in Sabah, Jeffrey said he was not so pessimistic to believe that would be the case.

"But should it happen, and we end up with no agreement, then we will need to implement what I call ‘Formula Z'.

"Formula Z means we have ensure all our supporters consolidate into one party only," Jeffrey added.

Earlier, at the beginning of the two-and-a-half-hour talk, Jeffery gave a history lecture on the formation of Malaysia, and said the political immaturity of Sabah and Sarawak at the time was exploited by Malaya.

He said Malaysia was supposed to be an equal partnership among the four nations of Malaya, Singapore, Sabah and Sarawak, with the interests of Sabah agreed under the 20-point agreement of 1963. However, the agreement was not honoured.

Some of the points in the agreement highlighted by Jeffery included the taking into account of Sabah's size and population for the state's representation in Parliament; the state having control over immigration and education and the ‘Borneo-isation' of its civil service.

To illustrate the poor treatment given to Sabah, Jeffrey pointed out that while the Sabah district of Keningau was larger than Perlis, Penang and Malacca combined, the district only has one parliamentary seat and three state assembly seats.

No development focus for Sabah, Sarawak

In contrast, he said, the three peninsula states have among them 26 parliamentary seats and 83 state assembly seats.

Sabah and Sarawak, Jeffrey added, did not get development focus from the federal government, with only RM9 billion allocated for the two states from the RM109 billion budget, and he also quoted a World Bank report listing Sabah as the poorest state in Malaysia.

He then showed the audience a picture of village in Peninsular Malaysia with tarred roads, contrasted with an image of four-wheel drive vehicle stuck on a muddy ‘highway' in his home state.