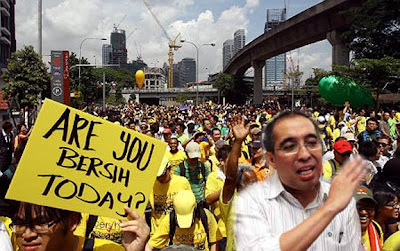 He said the opposition was trying to inject a new dimension into the country's culture through demonstrations to achieve their hidden agenda under the guise of democracy.

"It is just a ploy by certain quarters to wrest political power in the country. Street demonstrations or illegal assembly activities are not in conformity with our culture. It is against our noble and positive values.

"Such a culture will only encourage our young people to be agressive as well as causing relational friction, which is not good for our country," he told Bernama after launching an economic programme organised by Gagasan Badan Ekonomi Melayu (GABEM) and Persatuan Sama Sabah (PSS), here today.

Salleh, who is also State Assembly Speaker, was commenting on the participation of certain opposition parties in the Bersih 3.0 protest rally held throughout the country including in Sabah, yesterday.

He said the supposedly a peaceful demonstration but turned rowdy was a glaring evidence that such act might put public safety at stake.

He said they have ample opportunity and avenues to get their message across including via Parliment and the traditional and new media as such blogs and facebooks.

"They can voice their grievances through these channels. But they are not sincere because there is a hidden agenda behind it.

"In fact, We don't need demonstrations to express views. It will not solve the problems they are fighting for. I believe, as in the previous demonstrations, what they want is just to tarnish the country's good image," he said.

Salleh also believed that the Bersih 3.0 was politically motivated designed to gain sympathy votes in the coming general elections.

The former Chief Minister said the opposition should contest in the next election in a gentleman way without manipulating the people through street demonstrations for political mileage.

"We should allow our people to think rationally and wisely in a conducive atmostphere to evaluate parties' policies and programmes promised for them...let the election gives the power to the people.

"The people should not be taught to be rowdy against the police because majority of our people love peace, safety, peace, harmony and security," he said. (Bernama)
Posted by sabahkini.net at 09:07