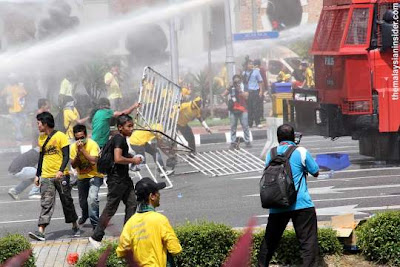 BARRIER....File photo of demonstrators bringing down the barriers to enter Dataran Merdeka on April 28, 2012. Picture by Choo Choy May

Police had obtained a court order barring members of the public from entering the historic square and Bersih leaders had also told supporters not to defy the order and instead hold their sit-in rally for free and fair elections up to the point they were stopped by police.

In the very first few seconds of the 19-minute video, Opposition Leader Anwar, who is standing on top of a truck, is seen making a rolling gesture with both hands in Azmin’s direction before the camera pans to the Gombak MP.

Azmin, who is standing on top of the barricade with his back towards the square, jerks his thumb over his shoulder and nods back in Anwar’s direction while an Indian male in a yellow T-shirt also makes the same gesture towards the PKR de facto leader.

The Selangor PKR chief then looks over his shoulder towards the man, who some on Twitter say is a PKR member from Negri Sembilan, who in turn points at Azmin and nods back.

A few members of the crowd of 15,000, who were sandwiched between the square and Kuala Lumpur City Hall (DBKL), begin chanting “masuk, masuk (enter, enter)” and the Indian man pushes the metal gate aside, allowing the crowd to burst through.

Less than two minutes later water cannon trucks open fire on the crowd and the rest of the video documents some of the ensuing chaos.

An earlier video released by the police shows the crowd running towards Dataran Merdeka before riot police fire tear gas at them.

But Bersih, the opposition and other observers have accused police of using excessive force to control the crowd, chasing protestors down other streets and firing “tear gas everywhere.”

Although the clip was available earlier in the evening, it was taken down repeatedly despite new versions appearing on social media network Facebook, YouTube and being shared via micro-blogging site Twitter.

At the time of writing, the video, reportedly taken by a news cameraman, was still available on YouTube.

Anwar and Azmin are due to hold a press conference at 11.30am where they are likely to answer allegations that their actions caused the violence that marred the rally that was peaceful up to then.

Tens of thousands who attended the electoral reform movement’s third rally in just over four years were dispersed by police with water cannons and tear gas after some rally-goers pushed through the barricade in front of DBKL and tried to rush into Dataran Merdeka.

Police fired as far as the DBKL premises, which are across Jalan Parlimen, and the move broke up the crowd who fled helter-skelter but police chased them down at Jalan Tun Perak and Jalan Raja Laut.

Angry protestors later attacked a police car which then crashed into at least two people while trying to flee.

After an ambulance took away the injured policemen, the protestors flipped the car over on its side but then fled after tear gas was fired.

Despite most of the crowd dispersing, a pocket of 1,000 demonstrators then engaged in open battle with riot police near Masjid Jamek.

A police officer was seen dragging a man across the road, which resulted in Bersih supporters attacking the police with broken bottles, mineral water bottles and broken concrete slabs.

A convoy of police vehicles ferrying Mayor Tan Sri Ahmad Fuad Ismail in one of its cars was forced to make a U-turn near Masjid Jamek when met with a hostile reception from protestors who threw shoes and broken concrete slabs at them, smashing the windows of two cars.

Police also arrested over 500 protestors, about a third of those detained in a similar rally on July 9 last year where a clampdown by the government saw Datuk Seri Najib Razak’s administration being widely condemned by the international press.
Posted by sabahkini.net at 10:30