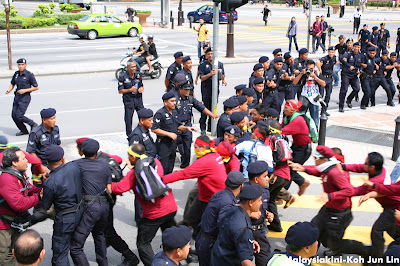 BERSIH admitted it lost control of the tens of thousands on the streets of the capital today when protesters failed to adhere to strict instructions not to breach the police barricade surrounding Dataran Merdeka.

Steering committee member Wong Chin Huat told The Malaysian Insider that Bersih chairman Datuk Ambiga Sreenavasan had ordered the crowd to disperse some time after 2pm but this message did not reach the crowd of thousands gathered outside the square.

People surrounded the police car which was overturned by protestors.

“The dismissal was announced but they could not hear. Ambiga could have been at one end and they could not hear it,” he said, adding that the Bersih co-chair had marched from her meeting point at Central Market and reached Jalan Tun Perak near Dataran Merdeka when she told the crowd to disperse.

When the rally continued, said Wong, Bersih leaders and security personnel from PAS’s Unit Amal failed to hold back protesters from proceeding to breach the barricade, which the election watchdog group had earlier promised it would not do today.

Following the breach, the Federal Reserve Unit and hundreds of riot police sprung into action, raining down chemical-laced water and tear gas canisters upon protesters who were running in droves towards the square.

The coalition of 84 civil societies also called for investigations into the violence that took place, pledging to give full co-operation to the police.

Ambiga told a press conference that the some 250,000 to 300,000 protesters who turned up were “extremely well-behaved and excellent,” until “someone” pushed through the barriers in front of Kuala Lumpur City Hall (DBKL) leading to Dataran Merdeka.

“The turnout itself was a success as we received so much support. Everything was going fine until someone broke through the barriers — which we do not support at all — and thus provoked the tear gas.

“We want the police to fully investigate all who engaged in violence. This was not what we wanted at all,” the former Bar Council president said.

Police had fired water cannons and tear gas on demonstrators who pushed through the barricade in front of DBKL, resulting in chaos on the streets.

Some of the 15,000-strong crowd broke down the barriers and moved towards the historic square, leading to police firing chemical-laced water and tear gas canisters.

PKR deputy president Azmin Ali tried to negotiate with police, who told the Gombak MP to calm the group down but they still broke through the barricades.

Police fired as far as the DBKL premises, which are across Jalan Parlimen, and the move broke up the crowd at Dataran who fled helter-skelter.

Angry protestors later attacked a police car which then crashed into at least two people while trying to flee.

The angry crowd then surrounded the policemen but volunteers from PKR’s Jingga 13 formed a human shield around the officers, saying “don’t blame them, it’s not their fault.”

After an ambulance took away the injured policemens, the protestors flipped the car over on its side but then fled after tear gas was fired. (Picture By Malaysiakini)