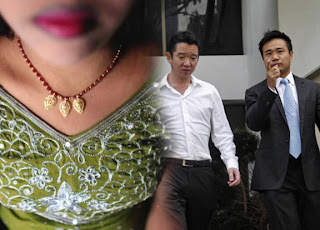 AN UNFOLDING scandal over an under-age call girl has shaken Singapore’s political and economic elite after businessmen, civil servants and uniformed officers were charged in the case.

Prostitution is legal in Singapore, but 48 men ranging in age from their early 20s to late 40s have so far been charged under a 2008 law making it a crime to pay for sex with a girl under 18.

Singapore has long been perceived as a conservative, even prudish, city-state but it has a thriving sex industry dating back to its beginnings as a key trading port of the then British empire.

The latest case has shone a spotlight on its pragmatic approach, which instead of seeking to close down the sex industry aims to tightly regulate the trade to protect minors and ward off criminal involvement.

An elementary school principal who pleaded guilty to engaging the under-aged girl’s services became the first to be punished when a district court on Friday sentenced him to nine weeks in jail for the offence.

Among the remaining accused are five foreigners including Juerg Buergin, a 40-year-old Swiss expatriate who had worked for banking giant UBS.

The most prominent of the Singaporeans charged is Howard Shaw, a high-society figure and grandson of Runme Shaw, co-founder of cinema and property empire Shaw Organisation, which is also active in charity causes.

The gossip mill went into overdrive when it was disclosed that Shaw, a 41-year-old with two daughters from his first marriage, had sex with the teenager just a month before tying the knot with his second wife, a former beauty contestant still in her 20s.

The two appeared on a recent cover of high-society magazine Singapore Tatler as the poster couple for an article on “great romances” among the rich and famous in the city-state.

Singapore websites and social media are swirling with speculation that more men will be charged even as the identity of the girl, only 17 when she had dalliances with the accused, is being concealed by court order.

People have also been sharing purported pictures and salacious descriptions of the girl, described by a defence lawyer as a “hardcore prostitute”.

But apart from generating juicy gossip, the high-profile case has also won the authorities plaudits for their rigorous handling of the issue.

“This is the first time that cases of obtaining paid sex from a girl under the age of 18 has been exposed and enforced on such a large scale,” said rights group the Singapore committee for UN Women.

Singapore’s legalisation of the sex trade makes it a “pragmatic” and “unusual” exception in a region where prostitution thrives but is officially banned, said Reuben Wong, a political scientist at the National University of Singapore.

The under-age prostitution scandal was “an embarrassment for Singapore as a society, because it has such a squeaky clean, puritan image,” but reflected well on the state’s strict laws on the sex business, he said.

“We recognise that it is not possible to eradicate it and forcing it underground will lead to the greater likelihood of involvement by triads and organised crime, the trafficking of women, and public health risks,” Ho Peng Kee, then a top official of the interior ministry, told parliament in 2009.

Wong told AFP: “Prostitution was legalised to bring this sector under close government control — for economic, moral, tax reasons…. The main overarching theme is we keep it under government control.” (AFP)
Posted by sabahkini.net at 10:20