IS ONE-TO-ONE FIGHT A PIPE DREAM? 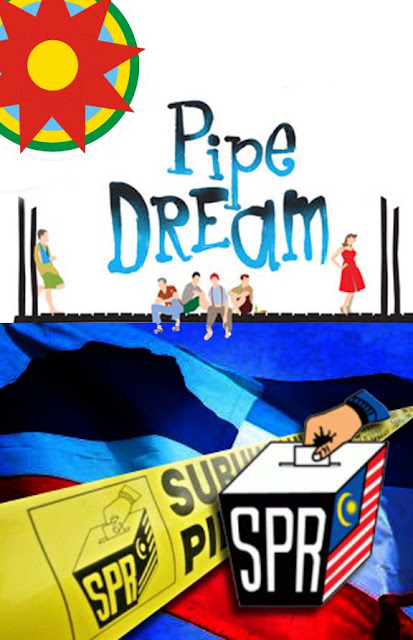 THE SABAH opposition cannot rely on its supporters voting for just any 'buffalo' in the coming general election, because the 'this is not the 1985 election anymore'. It’s a noble act on the part of Simon Sipaun to initiate the formation of the ad hoc committee, Democracy Sabah (Desah), whose objective is to promote “straight contests in the [coming general election] as a step towards promoting a two-party system”.

The talk about promoting one-to-one fights by those claiming to have learnt a lesson from the last general election is gaining momentum. This group is concerned that a multi-cornered fight will again give Barisan Nasional (BN) a victory, if not a bigger one.

Indeed, BN may have a reason to celebrate, even now, seeing that the opposition parties are still very confused about how to achieve this one-to-one formula.

Can this formula be implemented?

First of all, there are already two levels of political coalitions on the scene, one level for Malaysia (which is the Pakatan Rakyat) and another level for Sabah and Sarawak (which is the United Borneo Alliance or UBA).

The UBA has State Reform Party (STAR) and Usno (United Sabah National Organisation) in Sabah, and STAR and SNAP (Sarawak National Party) in Sarawak, while Pakatan Rakyat has the peninsular parties – PKR, DAP and PAS.

Outside these coalitions in Sabah are SAPP (Sabah Progressive Party), SPF (Sabah People’s Front) and the toothless Kita.

Now put all these parties with so many different characters, ideologies, strengths and motives into a basket, and ask yourself: How on earth to get them to agree on one-to-one fights?

PKR has initiated the move by talking to SAPP, a non-Pakatan party.

This gave SAPP a considerable amount of moral boost. DAP’s publicity secretary, Chan Foong Hin, said DAP “welcomes the announcement of PKR defacto leader Anwar Ibrahim who said that PKR is willing to give up its usual contested seats in Sabah to local-based opposition, particularly SAPP”.

This is an unbelievable show of accommodation and magnanimity from a party which has strong Chinese support.

“We must unite and form a great unity alliance in order to topple Barisan Nasional,” but in the same breath Chan added that “the opposition pact should be based on reasonable seat demands… any single party which wishes to contest most of the seats is not acceptable…

“To show its sincerity, DAP will agree on [letting] SAPP continue to contest in its incumbent seats… we will not agree if SAPP wishes to contest a two-third majority of the state assembly seats…. [and] local parties should join Pakatan (first).”

And that is the crux of the whole thing – DAP is already telling SAPP not to be too big-headed and stubborn.

SAPP, indeed, needs to tone down its over-ambitious announcements of wanting to contest too many seats.

Peter Liew, DAP state vice-chairman, said PKR should have negotiated with SAPP as leader of Pakatan and not of PKR, with prior consultation with the national DAP, or at least the state DAP.

His discomfort about the whole thing appears to be a reflection of the overall feeling of Sabah DAP.

In the meantime, with only 60 seats to split among them, how will the many opposition parties accommodate each other?

A senior Sabah PKR leader had said that “we cannot accommodate them all” as if it is PKR which decides it all.

In response to PKR’s so-called pact with SAPP, STAR chairman Jeffrey Kitingan, who has been calling for peninsular parties to stick to parliamentary seats, had issued a statement that STAR may contest all state and parliamentary seats although in principle, it agrees with Desah’s proposal for one-to-one contests.

Jeffrey has now taken a more hardline stance by saying that “mutual respect and sincerity of all opposition political parties are the keys to a win-win election cooperation… Let Pakatan focus on the 165 (75%) parliamentary seats in Peninsula Malaysia and let UBA contest in the remaining 25% seats in the Borneo states”.

“Pakatan has pledged to give back Sabah and Sarawak their autonomy. If this is genuinely their intention, then they should not contest in the Borneo states but allow and support the Borneo-based parties under the UBA to contest against the BN,” he said.

“If Pakatan insists on contesting in Sabah and Sarawak, then we know that their intention of giving autonomy is not sincere but merely a political gimmick… the seats allocated to Sabah and Sarawak are meant to protect their rights and position in Malaysia.

“If Pakatan takes the Borneo states, we would automatically lose the states’ bargaining position… and will end up in the same position as under Umno,” Jeffrey added.

Also, if accommodation “should be based on reasonable seat demand” as Chan said, why should a new and very weak party be allowed to contest in an area where another party has been working hard for years?

Should a party be allowed to share the precious seats just because it is registered?

Isn’t that a sure-fire way of losing to the BN? For example, why should a tiny and weak party which has just been registered be allowed to contest with a dead-horse candidate in a constituency where, say, STAR, had spent a lot of funds, time and energy on?

Why would STAR just accept such an arrangement when it knows that the arrangement is like giving the seat to BN almost without contest?

Wouldn’t it be better if in that situation STAR just proceeds to contest and become a third corner in the fray?

If such a situation arises in many areas, there will also be cases of other parties putting up independent candidates as well.

Or what if a weak candidate from a spineless party contests against BN, and then a very well-known, very charismatic, well-heeled independent candidate comes in, along with a few other independents?

Doesn’t that make the opposition’s one-to-one pact in the area useless and meaningless?

The opposition should not accommodate each other just for the sake of accommodating.

It should be reasonable and logical, based on real strengths of the party and candidate, as well as the voter characteristics of each constituency.

They should not bet that the opposition supporters will just vote for the opposition “even if the candidate is a buffalo” because this is not the 1985 election anymore.

The rules have changed and the scenarios have become more complex.

The other problem is every party wants to instil confidence in the people that it alone can become the government by contesting more than half of the seats.

As for SAPP, because it doesn’t want to join Pakatan and has turned its back on UBA, it runs another risk of continuing to be in a limbo, being neither here nor there.

Or is that now solved with the discussion with PKR? But there is no solid agreement on seats as yet, and DAP is still uncomfortable with SAPP.

DAP’s “assurance” of support is no assurance, knowing the firm caveats expressed by Chan.

If Sabah BN can be beaten, can SAPP hope to be part of a Pakatan plus (SAPP) state government?

The question now is: Can SAPP retain its incumbent seats?

Liew said those seats were won by SAPP while under the BN ticket, and that SAPP will now no longer enjoy the support of BN component parties (PBS, Upko and PBRS) and winning them again will be difficult.

Or could UBA, the coalition promoting the very attractive Borneo Agenda, take the higher number of seats to become the (senior partner in a) new government?

The impressive support it enjoys now might be an indication of such a possibility.

No news of SPF

With Anwar unhappy with UBA’s “parochial” politics, SAPP’s being a turncoat, and all the dizzy complications going on, there is strong possibility UBA will just forget the confused plan for an opposition pact and proceed to contest all seats.

The other question is, will Pakatan co-operate by heeding UBA’s proposal that the former should leave state seats to local parties?

Will the two ever sit down to thrash this out? As for Sabah DAP, would it be willing to comply and contest only parliamentary seats?

As for SPF, we haven’t heard anything from it (no ceramah, no launching, no statement on anything). All we have heard thus far is that an Umno leader had spent a sizeable investment on its office renovation, but the windfall of crossovers from Umno had fizzled out.

So, without strong leadership or promotional activities, it has little qualification to ask for a share of the seats.

With all these rock-hard questions hanging like a cloud over the opposition, the BN may not have to spend too much money campaigning.

And Sipaun’s Desah may have to work a lot harder than it expects, because as Sipaun admitted, “not many will agree to it.”
Posted by sabahkini.net at 10:52