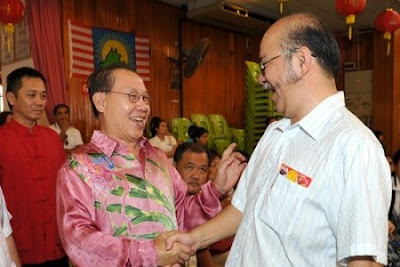 STAR Deputy Chairman, Daniel Jambun comes under fire from SAPP for his allegations. Sabah Progressive Party (SAPP) has ridiculed accusations by State Reform Party (STAR) that it is only fighting to be offered a better deal in the Barisan Nasional (BN).

“He appears to be totally ignorant of SAPP’s sincerity in cooperating with all opposition parties to topple BN.”

“Why must we lose all our privileges by leaving the BN? It has been almost four years [since SAPP left BN],” he said.

Speaking at a press conference held at SAPP headquarters here yesterday, Majimbun said Jambun’s statement revealed that he and his party colleagues were merely making use of STAR, which originated from Sarawak, as the stepping stone to gain control of Sabah.

He also expressed disappointment with the recent letter issued by the opposition party signed by Jambun that was addressed to SAPP president Yong Teck Lee.

The letter, among others, asked whether SAPP is in or out of the UBA (United Borneo Alliance).

He said SAPP had never signed any form to join the UBA. Nonetheless, he said SAPP acknowledged and supported the Borneo Agenda propagated by UBA as it was in tandem with the party’s (SAPP) eight core values.

“It is not that SAPP doesn’t want to work with STAR; in fact, we have been cooperating with Jeffrey Kitingan and PKR to work out a strategy to defeat the BN in the coming election.

“But if Jambun’s statement is really the word of STAR Sabah Chairman (Jeffrey), then it is most unfortunate,” he said.