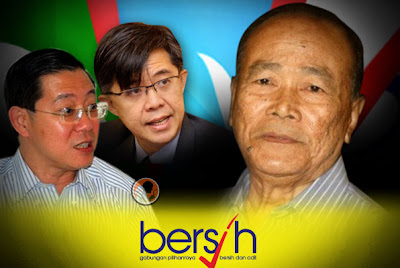 In a strongly-worded statement here, Lim declared that Tunku Abdul Aziz (picture) was alone in his view and accused the veteran politician, his senior in the DAP, of violating party processes on the eve of such a highly-anticipated event.

“Senator Tunku is alone amongst the entire DAP Central Executive Committee (CEC) in his stand on Bersih 3.0 at Dataran Merdeka,” he said.

Lim added that Tunku Abdul Aziz had not informed the party leadership that he would be making his stand public and had therefore contradicted the DAP’s principle of collective decision-making.

Although dissenting views within the DAP are permitted, he said members should abide by the majority decision made by the party leadership.

“This has placed the party in an embarrassing position of being criticised by our own senator for fully endorsing Bersih’s sit-in protest as an exercise of a basic human right of peaceful assembly,” he said.

During the Dewan Negara sitting yesterday, Tunku Abdul Aziz had openly declared his rejection of Bersih 3.0 and later told reporters that the event encourages Malaysians to “break the law”.

“My opposition to this kind of demonstration is — we are encouraging people to break the law and we are supposed to be lawmakers.

“I think there is a contradiction here.

Lim said that Tunku Abdul Aziz’s open rejection of the civil society movement’s push for free polls was tantamount to his endorsement of the “politically-motivated” Election Commission (EC) and the unlawful polls-rigging processes allegedly used by the Barisan Nasional (BN) government to stay in power.

“By opposing Bersih when so many Malaysians are working hard to effect change for a clean electoral process, Tunku has undermined their efforts and given a gift to BN and the tainted EC,” he said.

The Penang chief minister added that he has conveyed the party’s rebuke and unhappiness to Tunku Abdul Aziz over the latter’s remarks and informed him that his conduct has done more harm than good.

He repeated the party’s full backing of Bersih 3.0 and went a step further by urging all Malaysians to join the protest at Dataran Merdeka tomorrow.

“For the electoral abuses by a politically inclined EC, where its top officials are Umno members, that has allowed itself to be used as a tool by BN, DAP fully supports and will mobilise its members for the Bersih sit-in protest nationwide.

“DAP urges all Malaysians to join the Bersih rallies nationwide, especially at Dataran Merdeka,” he said.
Posted by sabahkini.net at 10:38