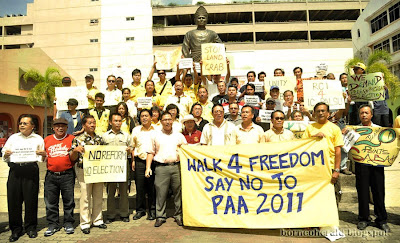 IN DONGGONGON, Penampang, a small group of 20 local activists who gathered at the now famous Datuk Peter Mojuntin Monument in Donggongon, Penampang, some 12 km from here, was denied the opportunity to sit-in at the monument. They however staged their sit-in at a mamak cafe just adjacent to the monument.

Workers of the Penampang District Council, and some believed to be policemen, carried out 'cleaning activities' at the monument from 11am till 4pm without stopping, the first time the authority did so on the monument in a very long years.

They even brushed the floor areas and the bronze (only legs parts because of its height) monument of the revered late leader of the Kadazandusuns, and made sure the area was wet at all time.

Jambun said the authorities had employed the 'Occupy First' tactic to deny the public of access to the monument. "We relented and just observed them cleaning the areas. We achieved our objective of a sit-in in protest of the unwillingness of the ruling party to clean our electoral rolls ahead of the general election," Jambun said.
Posted by sabahkini.net at 23:28