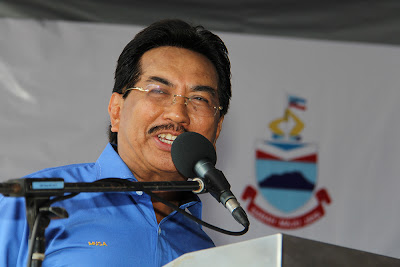 LAND ownership has always been a major concern in Sabah. The government recognizes this and is committed towards resolving this issue, according to Chief Minister Datuk Seri Panglima Musa Aman.

He said the State Government has issued 36 communal titles today, involving a combined area of 25, 896 acres at the Sook Plain in Pensiangan and Mandalom in Keningau.

This will benefit approximately 2,607 people from 46 villages in Pensiangan.

Musa, who presented the documents to village representatives in Sook today, said that this is the first phase of the Barisan Nasional’s promise to settle land ownership issues, and that more efforts will follow should the BN receive a fresh mandate from the people.

“The move to give these communal land titles is proof that this government walks the talk,” said Musa to a crowd of 5,000, where he also launched the Yayasan Sabah with the People Roadshow.

Development is high on Musa’s agenda, and the government will continue to bring development to Sabah and especially to the interior region, like Pensiangan.

“I know that Pensiangan still requires a lot more development, and more will indeed be coming your way,” he said.

During the event, Musa also received allocations from the Federal Government, represented by the Federal Land and Mines Department Director-General Datuk Seri Azemi Kasim, who presented RM10 million as federal assistance to the Native Customary Rights (NCR) land issues in Sabah, and RM70 million in land premium and land taxes due to the state government. (Insight Sabah)
Posted by sabahkini.net at 09:45