BN HAS FAILED THE SABAHANS 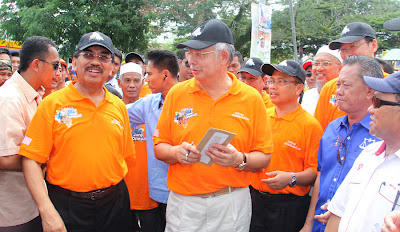 THIS IS a series of articles by the N16 Luyang candidate, Hiew King Cheu, to point out why Barisan Nasional (BN) had failed the Sabahans. The people of Malaysia have given BN more than 50 years of continuous rule.

In Sabah, there were four governments which were in one way or another aligned to BN, the bad administration of the Federal and State Government had resulted Sabah from being one of the richest states to become one of the poorest states today as reported by the World Bank. What have gone wrong?

Corruption runs on top of the list of BN failures. It is so rampant that it has become laughing matters in BN United Malays National Organization (UMNO) national assembly.

A former UMNO veteran said the practice of “money politics” was so prevalent that when Najib was elected (telecast live on national television) as Umno president in 2009, he joked in his closing speech “Inilah kita Umno dalam dilemma. Beri wang salah, tak beri kalah.” (“We in Umno are in a dilemma. If we give out cash, we’re in the wrong, but if we don’t give it out, we lose”).

“And everybody down there, the delegates, started clapping and laughing because they have been receiving and those on the stage, the Umno Supreme Council members, also clapped because they have been giving.   So it became a joking matter, something light – a culture that has to be accepted”, recounted the UMNO veteran. What began as handing out a few hundred Malaysian Ringgits to grassroots members soon snowballed into millions.

Before the 13th General Elections, the caretaker PM Najib has already announced that he will accept independents, pro-BN politicians or members of other political parties who are willing to jump ship – like the case of Perak in the aftermath of the 2008 political “tsunami”. Where power and authority is concerned, there is no such thing as “gentlemen” and BN will do anything to ensure they win and rule the country. Najib openly announced that BN would create political “road-blocks” not police road-blocks to ensure that the opposition’s march to Putrajaya will not be possible and BN will continue to rule.

DAP National Adviser Lim Kit Siang once said, “I do not think any MP is serious about the ‘cancer of corruption in our body’ politics would disagree with Tan Sri Robert Phang (former Adviser of Malaysian Anti-Corruption Commission - MACC) that the sixth conference of the International Association of Anti-Corruption Authorities that was held in Kuala Lumpur on October 3, 2012 would be worthwhile only if the Malaysian delegation were to use it as an opportunity to address the long-standing corruption allegations against the Attorney-General Tan Sri Abdul Ghani Patail.”

“No reason to celebrate but many grounds to rue over Transparency International (TI) 2012 Corruption Perception Index (CPI) which ranked Malaysia 54th as compared to 60th in 2011 as the least corrupt country in the world”, said Lim.

How much further will we fall if that happens? While he struts in his failure by saying I have grown a few beautiful feathers to replace the ones I have lost, the way things are going, he may one day say, the last time it was 100, now are now 99. Are we going to continue to allow him to do that to the people for another 5 years? When will the pain and suffering for the people be enough? We cannot be happy in our suffering and we should never be. Change will only come when we decide it and this is the time to do it.

The people have a positive opportunity to eradicate the ‘cancer of corruption’ when we replace BN with Pakatan Rakyat (PR) and this is the time for it.. There is no two-way about it. This has been proven in the states run by PR – Penang, Selangor, Kelantan and Kedah. PR appeals to the people in a bid for support that “Ini kali lah – Ubah/Tukar”. We shall march to Putrajaya and also take over the administration of Sabah in order for the changes to take place for the development and prosperity of the Sabah and Malaysia.

The second on this series is on Petroleum. (DAP Media)