I WILL FIX ARMY TRAINING AREA 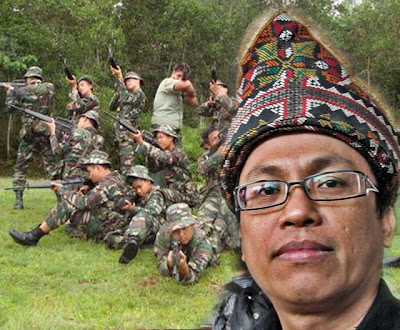 KOTA BELUD: An independent candidate for the Kota Belud parliamentary seat, Kanul Gindol, has pledged to do 'whatever he could' to get at least best parts of the huge army training camp here be excised and given back to affected villagers, if he was to be elected an MP at the poll this weekend.

Kanul, who uses 'key' as his symbol at this May 5 general election, said he was confident that as an MP he would be in most effective position to get the next Federal Government and State Government convinced to listen and bow to the aspiration of the affected Dusun Tindals in the army training camp.

"After all it is the people we are working for and protecting. Priority must be given to these natives whose legitimate rights to land of their ancestors had been denied by this 10,000 acres army training camp," he said to a group of voters while on a whirlwind election campaign to Kampung Losou Podi yesterday.

Kanul, who is also the immediate past secretary-general of United Sabah Tindal Organisation (USTO) said both USTO and KDCA had voiced concern after concern about the safety of the Tindal community living in the vicinity of the area more popularly known as Kem Paradise.

"Even USTO's president James Bagah had last year, well before the Tanduo stand-off in Lahad Datu, called on the government to close down altogether the army training area and shift it to a more strategic areas, perhaps in the east-coast of Sabah," Kanul said.

Kanul further said that it is not an empty promises on his part just because he was seeking an elected office.

"I shall seek the experts' opinion of sociologists and psychologists on the effects this training camp has had on these villagers. I will fund researches to look for alternative solutions to the problems of a growing need for land for the expanding families in the area," he said.

According to Kanul, there had been scores of fatalities among the Tindals in the area since 1980s, involving natives collecting unused bomb left in the area mistakenly good for scrap metals for sale.

"This army training area in Kota Belud probably is the only military base in the world that shares its turf with densely populated villages, with roads spanning over the training also used daily by the villagers including those from Losou Podi and Losou Minunsud and other kampungs.

Kanul, a journalist-activist, who is embroiled in a five-corner tussle for Kota Belud parliamentary seat also asked the governments as to what happened to a purported study on parts of the area to be excised and given back to the villagers.

"If i am not mistaken, Defence Minister Zahid Hamidi was supposed to visit the training camp and meet affected native leaders last year but it was aborted for unknown reason and that the minister had not bothered to meet the headmen till now.

"If the governments are sincere to listen and help, and if the "Rakyat Didahulukan" then the minister should have come and must have come. Solutions must not be delayed. We seek it while it is seekable," said the aspiring parliamentarian who is known for his sharp-witted comments.