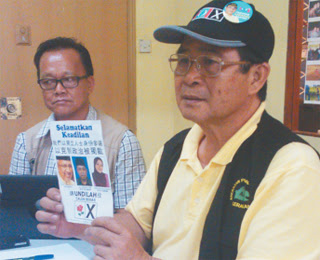 KOTA KINABALU : Chairman of Angkatan Perubahan Sabah (APS), Datuk Seri Wilfred Bumburing, on Thursday denied ever stating that the NGO is not seeking to contest in the election but merely to support the Pakatan Rakyat to victory.

Refuting Tuaran PKR Chief Ansari Abdullah, he said what he had said previously was that contesting in the election, to the APS, is not a priority.

During the negotiations between Pakatan Rakyat coalition partners, DAP, PKR and PAS with APS and Datuk Seri Lajim Ukin-led Sabah Reform Movement (PPPS), it was decided that the Tuaran Parliament seat and Tamparuli State seat be given to APS to contest.

"On the other hand, Sulaman and Kiulu State seats would be given to PKR to contest," he said at APS headquarters in Inanam.

However, Ansari, he said, stated that he did not want to contest in Sulaman despite being offered the constituency to contest. Bumburing said he asked Ansari why the latter rejected the offer and was told that the seat would be given to PKR stalwart, Mokhtar Hussin.

Mokhtar, who was present at the meeting, he said, was shocked when Ansari raised his name.

"Obviously, he was not prepared for it. However, he (Ansari) insisted he contest the Tamparuli State seat because he was comfortable with the racial mix of the population in the constituency," he said.

He said Ansari also stated that if his wish to contest in Tamparuli is not entertained, the latter would be out of politics.

PKR Deputy President Azmin Ali, who contacted Ansari about his decision, told Bumburing that Ansari accepted the party's decision and that he would not sabotage the candidate and party. However, Bumburing said Ansari's act in fielding his daughter Erveana to contest the Tuaran Parliament seat as an Independent is clearly an act of sabotage.

"He even paraded Ali Akhbar Kawi (Sulaman-Ind), Erveana and Rhodes Panilau (PKR) as the true PKR candidates," he said.

On Ansari's insinuation that he is an Umno stooge because of his alliance with Amanah Merdeka Rakyat, he said Amanah has nothing to do with the party.

In fact, he said, Amanah's line-up is made up not only BN members but also from the opposition such as DAP, PKR and PAS.

"This is a cheap tool to attack me," he said, adding that dragging his family into the fray is very unbecoming of Ansari.

Ansari claimed that Bumburing did not want to contest the seat because the latter wanted to be close to his mother as his father had passed away last year. Bumburing said he asked Pakatan de facto leader, Datuk Seri Anwar Ibrahim, three times previously whether he has to contest the seat.

"He said to me that he wants me to contest and contribute to Putrajaya," he said.

To this, he urged the PKR, even though he is not a PKR member, to take stern action against Ansari.

If Umno and the DAP could take drastic action by sacking its members for disciplinary problems, the PKR could also emulate them, he said.

If no action is taken against Ansari, he said, it would pose a problem to the Pakatan in its campaigning process in Tuaran. (DE)
Posted by sabahkini.net at 12:41