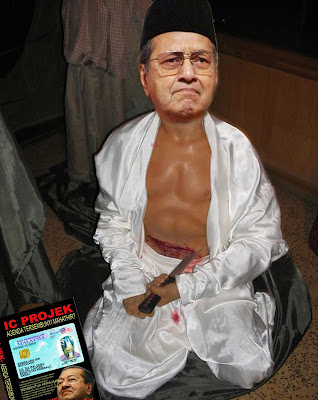 OPPOSITION leader Anwar Ibrahim struck a chord when he said that former Prime Minister Mahathir Mohamad should drop dead since he’s too old to be jailed and no prison wants to accept him.

If Mahathir doesn’t drop dead, he should take his advice to the Malays not too long ago to emulate the Japanese and commit hara kiri if they brought shame upon the community. Hara kiri is an addition to Mahathir’s Look East Policy.

Impatience with Mahathir, the grandson of immigrants from Kerala, southwest India, has reached a boiling point since the man has refused to shut up since the political tsunami of Sat 8 Mar, 2008 and has been virtually running amok in the media and across the length and breath of the country.

It seems that twice-born Mahathir who will be 88 on July 10 – his birth certificate states he was born on Dec 20, 1925 – wants to set, determine and dictate a self-serving National Agenda although he has one foot already in the grave. If not for two heart by-passes over the last 15 years or so, he would have been roasting in the eternal fires of hell by now. Everyone has been waiting patiently for so long to urinate on his grave, a favourite Malay pastime.

Everyone has a reason to hate Mahathir and his family who have been busy running up the National Debt Burden to put their hands in the National Cookie Jar under the guise of bringing so-called development to the people.

They have also been even busier using Petronas Funds as if they were inherited from his grandfather in Kerala. Sabahans and Sarawakians in particular are determined to recover these funds which originate mostly from their nations.

Anwar has vowed to end all Petronas contacts awarded to Mahathir’s children and kick him out as Petronas Advisor.

So, Mahathir has been busy hitting the campaign trail.

He has even visited various army, navy and police camps which have been declared off limits to the Opposition. That must be on Mahathir’s “instructions”. The Opposition is using the internet and text messaging to beam their campaign themes at the men and women in uniform.

On May 5, when Umno/BN does not do as well as Mahathir expects, it’s unlikely that his heart will be able to take the strain.

That’s the trouble with being an old geezer.

At the slightest sign of distress, their heart will kick in.

What more if you are a control freak like Mahathir who wants to have his cake and eat it too!
Posted by sabahkini.net at 09:33