WHY SAPP PICKED ON DAP AND NOT BN? 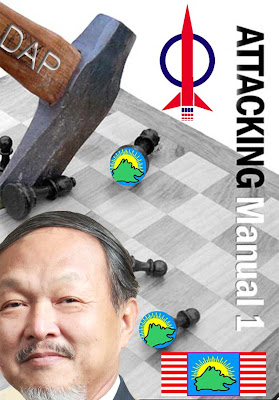 It is totally not understandable that the BN people are so silent over the SAPP, as if they are having 'Abang Adik' sort of close relation and ties. May be the BN and SAPP are still 'closely connected'. This sounds more like “I help you – You help me”!

SAPP is now seen as the local party contesting to split the votes and became a spoiler which Lim Kit Siang, the DAP National Advisor had predicted two years ago. It is true that the BN is now very happy, satisfy with this “special arrangement”, because some one is splitting the opposition votes for them to win. I

n fact, Yong Teck Lee knew about many foul things within the BN government, and this is because he was been working for them for many years. May be Yong choose not to elaborate or he couldn’t say anything now for fear that certain secrets may leaked out to hurt his friends in BN.

SAPP claimed that they are the local opposition party with Sabah registration and wanted the people to support them, but the real fact is that why they are so quiet on all the misdoing, corruption, abuse of power, and bad things of the BN? SAPP is always “jumpy” on the comments made by DAP, are they making the DAP to be their No.1 enemy and wanted to condemn DAP outright.

Yong said DAP, PKR and PAS are not Sabah registered party, therefore DAP for one cannot be allowed to form the government in Sabah and cannot hold the CM post. I like to remind Yong when he quoted that SAPP is a Sabah registered local party, but in fact he had forgotten that he flew to Kuala Lumpur in 1994 to get SAPP registered overnight to topple the PBS regime and his ex-boss Pairin Kittingan.

How come he is so forgetful and failed to understand the ruling of registering a political party and any form of association must go through the Registrar of Society in Kuala Lumpur.

He as a learned person could not make such wild and misleading statement repeatedly. On the other hand, if Yong is right, that means Sabah can register any political party they want to, and no need to go through the ROS in KL.

The DAP, PKR and PAS are registered as national parties and have branches all over the country recognized by the ROS. The SAPP is a only localized party in Sabah because they have no support in other part of Malaysia. That means DAP, PKR and PAS are big national parties while SAPP is only a “mosquito party” (as Yong had put it). SAPP is so small, why they want to talk big? It is better to allow the big PR component parties to administrate Malaysia and Sabah in particular.

Many people said Yong should not day-dream on forming the Sabah government when he said in his statement that in the event SAPP cannot win more than 50% of the state seat, he would invite other opposition parties to join him to form the new Sabah Government.

The people said he is overconfident and a bit overboard with high expectation that he will be the CM again. The Public opinion on SAPP winning the election is very low, may be he has to rejoin BN to fulfill his dream.

The difference between PR and SAPP is that we don’t have the attitude like SAPP. We just want to serve the Sabahan and Malaysian to our best ability, personal interest is secondary. This is proven in Penang, Selangor, Kelantan, and Kedah. (DAP Media)
Posted by sabahkini.net at 11:29