TRICKY FOR BN IN KOTA BELUD 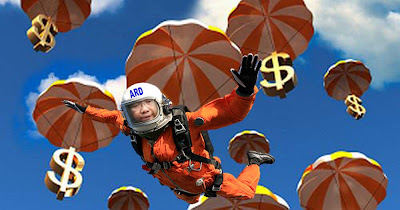 KOTA BELUD : It will be an uphill battle for Sabah Barisan Nasional secretary Abdul Rahman Dahlan to retain his Kota Belud parliamentary seat in the 13th general election.

Abdul Rahman is in a five-cornered fight in Kota Belud, the birthplace of Umno in Sabah.

In the 2008 general election, he won the seat with a 3,020 majority garnering 17,842 votes against his sole opponent then Saidil Simoi of PKR. Saidil chalked up a respectable 14,822 votes.

But this time, it will be tricky for Abdul Rahman, even though the Sabah Umno state deputy chief Salleh Said Keruak has expressed confidence of BN retaining the parliamentary seats and sweeping the three state seats within the Kota Belud constituency.

Abdul Rahman’s predicament began when he had to fend-off a strong opposition from his own Umno party via Lamsil Hamidsor. Lamsil is contesting as an independent against party wishes. He has since been expelled.

Many here believe that Lamsil is a plant sponsored by dissenting voices within Kota Belud Umno who are silently campaigning to deny Abdul Rahman a second consecutive win after he won Kota Belud in 2008.

In 2008, Abdul Rahman was “plucked” from adjacent Tuaran to replace Salleh as MP, much to the angst of the locals. He won nevertheless but with a much reduced majority from previous BN’s victories.

Abdul Rahman, a Umno loyalist, is also finding it very hard, if not impossible, to neutralise the surging support for PKR young candidate Munirah Majilis, who incidentally is Salleh’s second cousin.

On top of that, is the ground reality in Kota Belud, where the Dusun community make up the bulk of the voters.

Their votes are expected to be split between PKR and another surging opposition party, the State Reform Party (STAR) through its candidate Jalumin Bayogoh.

Added to this is is the sole Christian candidate in the fray, journalist activist Kanul Gindol, who is perceived to be the under-dog in the five cornered tussle.

Then there is the possible protest votes from the Iranun communities in Tempasuk who were denied a chance for any seat.

Iranun leader Pandikar Amin Mulia had been lobbying hard for the community to be given either the Tempasuk seat or the parliamentary seat.

Many among the Iranuns are now supporting fellow Awang Laiman Ikin, the PAS candidate for Tempasuk.

For parliament, their votes could go either to Munirah or Lamsil, something that Abdul Rahman is already aware off.

Meanwhile the entry of Gindol 47, in the five-cornered tussle could pose grim possibilities for PKR and STAR alongside the BN.

Local observers said Gindol’s participation may now swing the votes from the Christians who comprise 50 percent of the electorates.

This pose a threat to attempts by all three parties contesting to get the already-agitated Christian voters in the area.

This is worrying both BN and PKR camps. STAR, on its end, is already going around explaining why they picked a Muslim instead of a Christian for the Kota Belud seat especially after it had announced a Muslim candidate Majimis Timbuong for the adjacent Kota Marudu parliamentary seats which also has an overwhelming majority of Christians.

Already, according to observers in Kota Belud, the Muslim voters were split between BN-Umno and PR-PKR-PAS with most Iranuns in Tempasuk could be again voting for any opposition candidates.

Kota Belud has 51,467 voters, the fourth largest parliamentary seat after Sepanggar, Silam and Tawau in term of number of voters.

Independent candidate, Gindol when contacted said he sees himself as the best alternative for a complete change and overhaul in the district’s political landscape.

“Many in Kota Belud are fed up with promises years in years out, with pivotal figures always busily putting up their own cronies and proxies.

“There’s little thought to the real needs on the grounds — better infrastructures, a fairer power-sharing formula among the communities in the district, and restoring dignity of being Sabahans,” he said adding that he was using the “key” as his symbol in the polls.

He said he was well aware that he was trailing behind the other four candidates but was hopeful that “this would change”.

“Right now I am in the last spot but I hoping to get into number four spot in days time, and then go for the third spot. When third spot, I would mount a serious attempt to defeat the top two…” said Gindol, without elaborating his strategies.
Posted by sabahkini.net at 12:37