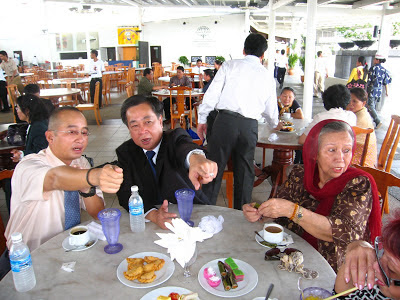 BN Candidate for Kapayan, Datuk Edward Khoo’s claim that BN is sincere is a mockery to the people in the constituency. For the past two terms that Khoo served as Kapayan’s Assemblyman there had been grumblings even among his own MCA people and the issue of his candidacy in the constituency serves as a slap on the face of thosewho wanted him out.

Despite the vociferous objections by Penampang MCA division leaders over Khoo’s candidacy, BN went ahead and placed him as candidate again, a decision that would surely auger bad vibes among those peole.

There had also been so many complaints of neglect by voters in Kapayan over the inefficiency of Khoo and his continued presence in the constituency will surely deprive the constituents of the progress they need.

At one political gathering in Kg. Hungab, Penampang it was mentioned that the greatest achievement by Khoowas the construction of the Sewerage Treatment Plant at Kituvan, an area that was once cultivated with Padi.

The fear now is that once the treatment plant is operational the stench will affect the whole stretch from Kapayan to Donggongon. This is a fact that Khoo cannot deny and he must bear the brunt of the peoples’ anger.

Another issue is the difficulty faced by people in reaching him because he never responded when called. He was jeered by residents when he conducted his walk-about in one Kampong, and when asked why he only came during General Elections his reply was that he always attended Harvest Festival celebrations in the area.

His attendance at Harvest Festival celebrations does not reflect any commitment in serving the people and by this admittance the voters in Kapayan should reject him outright in this coming election.

Khoo, hailing from Sandakan, should have been grateful that he was given the chance to serve in a constituency that he was alien to and should have spent his time serving the people to win their hearts. But what he did every time people came to him was to direct the complainants to check with his Community Development leader.

Khoo must remember that the voters did not elect the Community Development Leader. They elected Khoo to be their leader and they deserve every right to ask him for help.

Another issue is that Khoo had promised was that he would reside in Kapayan but sources say that he is residing instead in Damai, Luyang. His address in Kapayan belongs to one of his ‘Machai’ and this is a gross example of a phantom voter in the Kapayan constituency.

In the 2008 General Elections, Khoo asked the people to give him one more time to serve them with his pledge that he would serve them to the best of his ability. Khoo emerged victorious due to the split in the opposition votes but this time round, the voters must understand the situation and vote for the party or the candidate they believe would serve them.

Khoo must not be given any more opportunity to serve as Kapayan’s Assemblyman as the problems of poor drainage in the area will never be solved.

The problem of congestion in Donggongontownship, as well as bad roads in the villages, will also remain unresolved because Khoo will not be bothered to attend to them. After-all he is not a resident in the constituency, so why should he care?

BN’s slogan of ‘The People First’ will never happen in Kapayan so long as Khoo remains the constituency’s assemblyman.