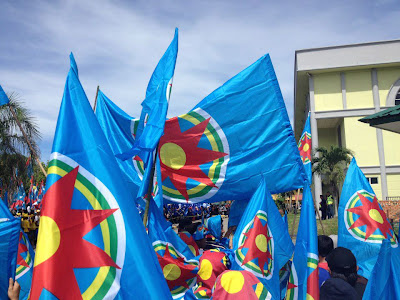 Sabah STAR Deputy Chairman Daniel John Jambun said that he was utterly shocked by Najib's speech in Bongawan yesterday in which he said that, " Sabah made the right decision to join the Malaysian federation, which paved its path to independence on Sept 16, 1963 ."

"This is really shocking coming from the prime minister, as it shows his ignorance about Malaysian history. He does not know the genesis of Malaysia , his own country," Jambun said. "No wonder the Malayan attitude towards Sabah 's rights and autonomy will never change, all because of this ignorance about historical facts which is also the problem with all Malayan ministers and government officers.

"Obviously Najib needs to be educated that Sabah never joined Malaysia, but formed Malaysia together with Malaya, Singapore and Sarawak. And this creation of Malaysia did not lead to Sabah 's independence. We became an independent and free nation two weeks before that, on August 31, 1963 ."

Jambun, who is contesting for the Sepanggar parliamentary seat under the STAR ticket, he was disgusted by the whole attitude of Najib's speech which was one of brazen condescendence as if Sabah is so dependent on Malaya for its existence and survival.

"Najib should know that without the participation of Sabah and Sarawak there would have been no Malaysia , and Tunku Abdul Rahman knew this," he said. "The Tunku was desperate for the participation of the Borneo states because he knew that without Sabah and Sarawak the Malayan Malays would have been outnumbered by the combined Chinese populations in Malaya and Singapore .

"So having heard what Najib said yesterday, Sabahans need to ask themselves whether it is worth supporting BN/Umno which is still ignorant about our history and our real aspiration within the federation. Sabahans now cannot be sure if the Malayan leaders will ever respect Sabahans or have their hearts truly committed to the wellbeing of Sabah and its future in the federation.

"They think we owe them something big while in fact it is the other way round. We helped the creation of Malaysia , and after that Malaya took so much from us that we became the nation's poorest state. We have become Malaya 's underling and provider state getting very little from the national budget for our development.

"And now the PM comes here and expect us to be thankful. He even tried to firghten us with security matters by saying only BN can defend Sabah ," Jambun said. "He has also forgotten that without the votes from Sabah and Sarawak , the BN would have lost Putrajaya in 2008. Having seen this, it is time for Sabahans to decide to reject BN on May 5."
Posted by sabahkini.net at 16:02