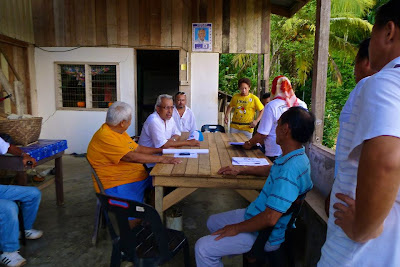 KOTA KINABALU: Is the resignation of several Sabah PKR division leaders and grassroots members and their crossover to Umno, a sign that the long since rumoured exodus from the party has begun in time for the May 5 polls?

Following the entry of Barisan Nasional defectors Lajim and Bumburing as Anwar-PKR allies in Sabah, rumours have been rife that an exodus was imminent.

Lajim and Bumburing are current incumbents in Beaufort and Tuaran parliamentary divisions.

Over the months ground reports of scuffles and disagreements between PKR “originals” and “copies” (referring to Lajim and Bumburing’s people) have been dismissed as “rumours” or “not a serious issue” by the central leadership.

The simmering anger appeared to peak when Tuaran PKR division chief Ansari Abdullah pre-empted PKR announcement of the Sabah candidates by releasing its own list of seven individuals purportedly endorsed by seven divisions.

But Anwar’s pre-nomination announcement that APS and PPPS had been allocated five parliamentary seats each and collectively 23 state constituencies – just over a third of Sabah 60 seats – to contest has cut deeply through the party.

At a press conference here yesterday, four division chiefs and a deputy division head announced their resignation and their move to Umno.

Ansari was not on the list but he reportedly said that Bumburing who is contesting in Tuaran will not get the support of the division’s 6,000 members.

Rumoured to be joining Umno any day now are some1,500 PKR members from Beaufort where Lajim is the incumbent MP. Former Beaufort PKR division chief Abdul Jarih @ Ramli Ukin had earlier quit the party.

Anwar is scheduled to visit the state over the weekend.

Speaking to reporters here, Mazhry said their decision to resign from the party was made after taking into considerations that Anwar had “lied” about Bumburing and Lajim’s role and their inclusion into Sabah Pakatan Rakyat and the central leadership dismissal of state-level decisions.

Said Mazhry, who was until his resignation yesterday Sabah PKR’s deputy election chief: “I have been in PKR since 1999, and I made the decision to leave the party because of unavoidable reasons. Sabah PKR is no longer reflecting what the people want.

“All decisions are made by the central leadership without consultation with state leaders.

“We were informed of APS and PPPS inclusion into Sabah Pakatan only at the last minute. We were not informed of any ongoing discussions with them.

“During a meeting in Sandakan, we asked Anwar about this and he said not to worry because APS and PPPS will only be allocated the Tuaran and Beaufort parliamentary seats.

“But now in the end, APS and PPPS are in control of Sabah PKR’s politics.”

No ‘justice’ in PKR

Another division leader Saidil from Kota Belud said he quit because he felt “guilty” .

“I only realised this at the last moment when I saw just how empty PKR’s struggles are.

“Anwar is a charismatic speaker. He can influence your thoughts with his word… but let me tell you Anwar has a personal agenda.

“I have since asked myself: do I want to continue fighting for a party that is named Parti Keadilan [Justice Party] but is not practising justice? I feel guilty because I lied to myself and the rakyat,” said Saidil, who was involved in coining the Sabah Buku Jingga.
Posted by sabahkini.net at 10:01