WHICH PARTY SHOULD SABAHANS VOTE FOR? 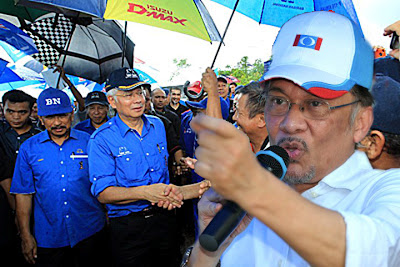 I ASKED an old friend sometime ago why he was still stuck with BN when he himself had so many grouses and complaints against them. His answer was grim and sinister. He said: “BN will do this to me”, as he slit his throat with the tip of his fingers in mockery.

I got his message loud and clear. Once you are in BN, you will find it almost impossible to get out. From his expression, it is almost like joining a cult or mob, for that matter. If you try to desert them, beware. They will hunt you down.

Then again, those who have had enough of BN government typified by UMNO, believe that only a handful of people have really benefitted. It is an all too familiar decree once used by autocratic regimes such as the Tsar of Russia, Shah of Iran, and Louis XVI of France where only the elites, middle-class and, or select few comprising cronies, and so-called die-hard supporters were richly rewarded, while the rest live in poverty, mediocrity or total subjugation.

By favouring certain classes of people, these regimes were able to rein in the helpless and powerless majority much like a feudal system of a bygone era where the high and mighty oppress the masses.

All these regimes have one thing in common: they use fear, threats and intimidation to create a society that is dependent on government as the sole provider and, or savior, perhaps, even above the Almighty. Would you vote for such a party? Let me rephrase this question. Would you vote for a party, any party, in cahoots with such a regime?

Why not PR? Well, you do not have to go inside the party to know what it is all about. PR is the epitome of the English saying: “Too many cooks spoil the broth”.

Let us start with PAS. I must admit I am not well versed in their ideology, but, from my own research and observation, it seems to be suffering from a serious form of identity crisis.

One moment it appears to champion the cause of Muslim brotherhood, the next it is seems to do the opposite. In the 1980s, it was perceived as a radical Muslim party but it has been trying to rebrand itself as a moderate party in recent years in the hope of making it more attractive to non-Muslims and fit in the fragile PR coalition.

However, its hard line stance on Hudud Law has reared up once again. It is easy to see why the party is uncompromising in its advocacy for the promotion of this ancient law in a country that is only 55-60% Muslim. After all, it draws 100% of its support from Muslim Malaysians, particularly traditional Malays. I would not vote for such a party, if I were you.

Let us move on to DAP. I am inclined to think that this party is somewhat like the Kuomintang that fled China in 1900s to escape from the Communists. Yet, it has socialist ideals and claims to be a democratic party, a democratic socialist party, rather, according to its founder Lim Kit Siang.

History has proven that the infusion of socialist elements into a democratic system is not always workable, as the Labour Party of Great Britain has bitterly learnt. In fact it was the reason for DAP election fiasco in December 2012.

DAP is ruled by a Central Executive Committee (CEC) much like the Central Committee of the Communist Party of the Peoples’ Republic of China, making it vulnerable to manipulation, power struggle, and non-transparent decision-making processes thus negating its democratic values.

It must have been such an embarrassing episode for Lim Guan Eng that the party almost could not field its candidates under its own symbol in this Malaysian general election and all because of his heavy-handedness in the DAP election. Would I want to vote for such a party? I might if I were a West Malaysian.

PKR is a party that does not seem to have a Plan B, C or D in place. Everything it once abhorred about UMNO seems to be have been gladly embraced and, or condoned, cronyism and favoritism for instance. It now looks as if it is the reincarnation of UMNO in so many respects.

Major decisions appear to be made arbitrarily and, or at the spur of the moment. Can someone tell me who PKR actual leader is? Is it Wan Azizah, Anwar or Azmin? Little wonder why you may appreciate that there is some truth in my earlier article entitled “Beaten by a sucker punch”.

Just look at PKR Sabah. It is in shambles, to put it mildly. I could be wrong of course, come 6th May when the full election results are known. But must we remind their leaders again and again that PKR and PR may be good for West Malaysians, but not necessarily for Sabahans and Sarawakians, because regardless of political allegiance, East Malaysians and West Malaysians harbour a mutual distrust or mistrust for each other?

Just ask Anwar and Ansari, or Najib and Taib, or Pairin and Mahathir. Outwardly, they are all playing wayang kulit or false pretences but deep within, they are not. It goes without saying that you cannot trust anybody in politics.

Why not SAPP? I have some good words for SAPP not merely because of the fact that it is anti-BN or than it is not so lovey dovey to PR, but it is a Sabah-based party. What actually puts me off this party is that, I see it more as a Chinese-based party although it claims to be multi-racial, hence, yet another party suffering from identity crisis.

This will be its Achilles’Heel during the election as the Chinese community would be unsure which Chinese or Chinese based party is best for them. Would it be DAP, or SAPP?

What is left requires no formal introduction. You may say my reason for choosing STAR is pretty obvious. My dear sister, Juliana Situn, is contesting as a parliamentary candidate for P179 Ranau, my hometown.

And surely my patient readers would agree with me that blood is thicker than water. But then again, I do have other valid reasons. During one of my visits to my Ranau recently, I was amazed by spontaneous peoples’ support that was only reminiscent of that of PBS in 1985. Remember, nobody gave PBS a chance in 1985 but it defied all expectations.

STAR (Sabah Chapter) of today is the rebirth of PBS of 1985, period. I am under the impression that it has well defined goals, agenda and manifestos thanks to the excellent vision of its leader who was once the brain of Huguan Siou Pairin himself and PBS.

By the way, when I speak of PBS I also mean to include UPKO and PBRS. I have been a PBS supporter all my life until one fine day I said enough is enough. PBS now is nothing like PBS of 1985, the party which captured the people’s imagination across the State.

PBS now is like a steamship that is waiting to be grounded due to old age. Either its engine requires a complete overhaul or the hull badly needs a massive facelift. The good old days are long gone. The only thing that keeps it afloat is the resolute determination of HS Pairin who is 72 years old. Were he to go one day, do I see any deputies qualified take over, let alone to tie his shoe laces?

So, if you love Sabah, you know which party to support and vote for on 5th May 2013. INI KALILAH, KITA AMBIL BALIK!