FOUL PLAY BY JUMAT AND YEE? 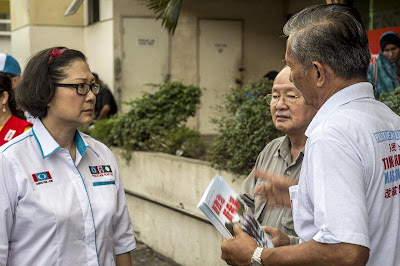 KOTA KINABALU : PKR candidate for N.15 Api Api, Christina Liew , said she is concerned over what she described as attempts to intimidate the people into not supporting the opposition.

She said she received complaints from party supporters in Sepanggar that the Barisan Nasional candidate there, Datuk Jumat Idris, had been telling people that the ruling coalition has ways of finding out who they voted for in the May 5 general election.

"He apparently issued the veiled threat to the Kg Nambak fire victims Thursday afternoon," she alleged.

"This is foul play. We don't have a level playing field in the election. Where is the so-called pledge of integrity by BN leaders?" she asked.

She also expressed surprise over BN candidate Datuk Dr Yee Moh Chai's claim that it is an uphill fight for him as he has to face four challengers.

"This means he has not been doing his work as the elected representative for Api Api over the last five years. Yee is the incumbent Assemblyman. He is also the Deputy Chief Minister with ample resources and institutions backing him.

"He had the power and if he had served his constituency well, he need not have to worry about his fate. His claim makes him look like trying to fish for sympathy votes," she said in a statement, Thursday.

Furthermore, Liew said it is public knowledge that Dr Yee had the bonus of some 4,000 voters imported into the Api Api Constituency, despite protests from even the Umno division there which had also alleged that goodies were given.

"So there is no reason for him to worry. It is me, the PKR candidate who is having an uphill battle with limited resources and manpower. But we strongly believe the people are with us because their desire for change is very strong."

Saying the people of Kota Kinabalu are able to distinguish a hardworking Wakil Rakyat from a "Yes Man" of BN-Umno, Liew said it's now time for a report card by the people.

"Only with the people's support will Pakatan Rakyat win the 13th General Election.

We don't play tricks, we win with our hard work, sweat and clean record only," she added. (DE)