YONG'S FIGHT EXPECTED A TOUGH ONE 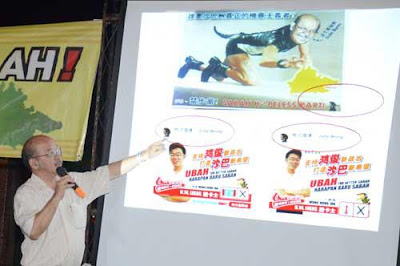 KOTA KINABALU : Sabah Progressive Party (SAPP) President Datuk Seri Yong Teck Lee has expected his fight for the Likas state seat to be a very tough and intense one.

He said this is not so much because he is facing a four-cornered fight with candidates from Barisan Nasional (BN), DAP and STAR.

But the real challenge is coming from what he termed as "very powerful interest groups that is determined to make sure he loses.

"It's not just Chin Su Yin (BN-LDP), or Junz Wong (DAP), or the STAR candidate (Ho Cheong Tshun). There are very powerful vested interests behind my opponents, come what may, must make sure I lose.

"So we are expecting intimidation, bribery, lies etc to surface in the coming days, to make sure I do not win at Likas," he said.

He said this while speaking at the SAPP 'Kopitiam Ceramah' held at the Foh Sang shops, in Luyang, here, on Sunday night.

Despite having painted a gloomy picture on his winning chances, Yong nonetheless went on to present a compelling reason on why he should be voted in this time around.

Even if SAPP does not form the Sabah Government, Yong vouched that if he is voted in at Likas, he will ensure there is "no peace day or night' for the chief minister, Datuk Musa Aman, even if BN wins the majority seats to form the State government, after the 13th General Election.

First and foremost, he said he and his party colleagues (who are voted in) would move a motion of no confidence against the chief minister starting with the issue of the RM40 million "donation" to UMNO that was intercepted at Hong Kong.

"If we can do it to the Prime Minister of Malaysia, what is the CM of Sabah?" he said. He was obviously referring to the historical move against the former Prime Minister Tun Abdullah Ahmad Badawi by the two SAPP leaders namely Datuk Chua Soon Bui, former MP for Tawau and Datuk Eric Majimbun, former MP for Sepangar, in 2008, when SAPP was still in BN.

Beside this, he also promised to raise the various pressing issues affecting the State and its people. This included such issues like the reduction of land lease by the State government from 999 years to 99 years; the grabbing of the Native Customary Right (NCR) lands occupied by the native people and the State lands by a certain statutory bodies and major companies; the Saham Amanah Sabah fiasco, the so-called political donation of RM40 million to UMNO which was intercepted by the Hong Kong authorities and etc.

"We will take up these and many other issues in a ferocious debate which must be conducted in Bahasa Malaysia. So far I don't see any other opposition candidates who are capable of this. Jimmy Wong (DAP Sabah chief) already proclaimed himself as 'Setengah Tiang'(half-past-six) ADUN, while Hiew King Cheu (DAP Sabah Adviser) has never debated in parliament except for reading from prepared speeches. I don't see how the other leaders whether from PKR or DAP can do it," he pointed out.

The former chief minister of Sabah further noted that not only that it takes courage and skill to debate effectively in Bahasa Malaysia, but more importantly, the debater must also have vast experience in the Government and knows how the system works.

"Hence, if I'm elected, not only that the opposition will not be humiliated like what happened to the 'Setengah Tiang YB' in the past, I will even whack them (BN reps) hard (in the State Legislative Assembly)," he said."

He reiterated that this is also the reason why there are powerful vested interest groups who are fearful and will do anything, by hook or by crook, to make sure he loses in this election.