ONE LAST CHANCE FOR MCA TO SWAY VOTERS 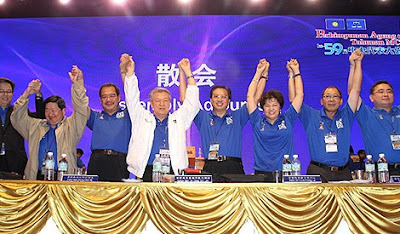 TIPS....The latest is the attempt by MCA's Deputy President Liow Tiong Lai (right) to reach out to Chinese voters by offering health tips for the Chinese New Year season.

AS THE CURTAIN comes down on the Malaysian Chinese Association (MCA) as a force in Malaysian politics, Malaysians are being treated to demonstrations of desperate behavior by the MCA top brass to show that they are still relevant.

No doubt the book launch speech by the Health Minister has been widely reported in the mainstream media.

His backroom boys will probably be flattering the minister about how clever he is in referring to the lucky number of 8888 and its association with wealth and health in reaching out to the Chinese electorate.

But will it work on the Chinese electorate? What Chinese voters want? Will Chinese and Malaysian voters be easily swayed by such gimmicks which can be expected to intensify as we get closer to the elections?

My view is that it will not.

In fact, even MCA insiders realise that the Chinese electorate is a more sophisticated and discerning one. MCA veteran Woon See Chin, a former deputy education minister, for example, has admitted that generous handouts such as the RM200 smart phone rebate and RM500 1Malaysia People's Bantuan would not help win back the support of disenchanted young Chinese voters.

His observation that "Chinese youth are more independent" and that "they don't rely on any political parties; some of them have never received any financial aid from the government", is true not only for Chinese youth but also for the majority of the Chinese and Indian voting population.

What will the Chinese (and other Malaysian) voters be influenced by? Chinese voters want change.

They want a party that can stand up to Umno and its almost 60 years of self-serving politics of racism, cronyism and opportunism that have damaged our economy, ruined our educational system and made the future darker for all Malaysians, especially for non-Malays.

How to change our system? I have been told that guidance to MCA is akin to casting pearls before swine and also that the leopard will never change its spots. Nevertheless I would like to offer some advice to the MCA leaders and its supporters for the coming elections.

According to feedback obtained from the Chinese community and through my participation in political ceramah and interaction with the man in the street, MCA and Gerakan will be wiped out as political parties in the elections. This is because few if any of its candidates will be able to win enough votes to be elected even in Umno dominated constituencies.

This worst case scenario is based on two important considerations:

The Chinese view that Umno cannot and will not change its hard line ketuanan Melayu and ketuanan Islam ideology and policies which have scarred our nation and ruined the future of most Chinese youth.

The general view that MCA will never be allowed by Umno to be anything but a toady and boot-licking party.

Faced with an impending disastrous performance in the election which could mark the end of the party, there is only one option that is available for the party and its members to pursue between now and the elections.

This option is that MCA leaders and members should not support BN. Of course, it is too late for the party as a whole to take action to and make the momentous decision to get out of the BN coalition.

This historic decision should be left to another time. NONEBut in the meantime, individual leaders and members can signal their disapproval with the way that Umno has been running and ruining the country and their disgust with the way in which it has treated MCA as a lap dog.

This can be done by abstaining from taking part in the elections and by not supporting BN during the elections. Such a decision may be difficult for the likes of the top MCA leaders and central committee members who have profited from lucrative contracts, commissions, datukships and tan sri-ships.

But for the party's middle-level leadership, this is the right time to shift their allegiance to the opposition coalition and for them to work to ensure a Pakatan victory.

Their contribution to ousting Umno from power can come in many ways such as urging constituency members not to vote blindly for BN candidates; secretly providing support to opposition candidates; alerting the NGOs monitoring the elections of the BN's dirty tricks and likely abuses; dragging their feet on being co-opted as a BN election workers; etc.

Unlike the party's leaders who have accumulated so much wealth by being cronies of Umno, the middle level and grassroots leadership have gotten crumbs whilst being kicked around. Only by working for change will they be able to win back the respect of the Chinese community and convince their friends and children that they have not sold out the Chinese community by being members of MCA.

The coming election provides the last chance for MCA leaders and members to change the course of history - positively.

I and millions of Malaysians urge them to make a stand for change by working to ensure that the BN loses, for the opposition to take over Putrajaya.

(NOTE : Koon Yew Yin, a retired chartered engineer, is a philanthropist)
Posted by sabahkini.net at 00:28