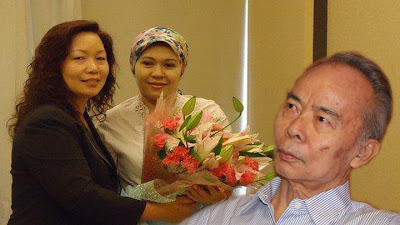 PENAMPANG: In a rare clash of political confrontation between senior-level dignitaries in Facebook, the wife of Tan Sri Bernard Dompok today (April 26) asked Tan Sri Simon Sipaun a provocative question that prompted the latter to reply with uncompromising firmness. Siapun is a wellknown and popular retired state secretary of Sabah.

Dompok's wife, Diana, had politely asked Sipaun, "Dear Tan Sri Simon Sipaun. I held you in the highest of regards. What I don't understand is WHY ARE YOU SO BENT ON BRINGING UPKO DOWN?"

Sipaun is also the Chairman of Desah (Democracy Sabah) an NGO which worked to attempt to achieve one-to-one fights between BN and the opposition in all constituencies in  Sabah during this election.

For the last many years he has been presenting hard-hitting papers in political seminars and dialogues organized by the opposition in which he spoke on long-standing issue affecting the Sabah natives.

It is believed that Diana is irked by his participation in Penampang's opposition campaigns, including for Darrell Leiking who is standing on a PKR ticket, and this unavoidably hit on Dompok as the BN candidate for the same parliamentary area.

He replied to Diana was polite but firm: "Dear Puan Sri Diana, I think you have misconstrued my position. I am not a politician. At no time did I ever have the intention of bringing down any political party. Even if I wanted to I will not be able to do it.

"... Sabah has known only one federal government for the last 50 years. It may be called BN but it is basically UMNO calling the shot. Thousands of Malays have deserted UMNO. This is very telling and speaks volume. A Malay taxi driver told me 'Ini UMNO tahu jaga kuncu-kuncu sahaja' (this Umno only knows how to look after cronies). After 50 years what have we got in Sabah?

"There is a litany of them. But let me name a few. Sabah is inundated with illegals to the extent that the KDM used to be 43% of the state population 50 years ago now that figure is hardly 15%. The KDM is at the risk disappearing altogether from the face of the earth.

According to the World Bank and UNDP Sabah is the poorest state in the country in terms of per capita income yet rich in natural resources.

"Employment opportunities are so limited that thousands of our youths had to leave for other places to find a living. Gas is found in Sabah yet it had to be transported through a gas pipe line 512 km long and costing in the billions of ringgit. Common sense and conventional business wisdom dictate that the processing plant should be located as near as possible to the source of raw material. I have seen houses of poor villagers which had been burnt by enforcement personnel. They lost their paddy, gongs, documents, etc.

"What sort of uncaring government is this? Corruption is rampant and getting worse. Many rural people have no access to health, medical and educational facilities. Singapore which was kicked out in 1965 should be thankful that it was ejected from Malaysia. Brunei was wise for opting out.

"The so called BN manifesto should really be a list of accomplishment after 50 years! Malaysians are yearning for a change because they have known what life is like after 56 years of the same UMNO dominated BN for Peninsular Malaysians and 50 years for Malaysians in Sabah and Sarawak. BN which has never known what it is like to be out of power will do everything and anything to remain in power.

"If not why did the government see it fit to declare illegal Bersih simply by promoting clean, free and fair elections? During this election BN has the upper hand because the playing field is not level, no equal and free access to the media, government machinery is being used/abused etc, I can go on and on but time does not permit. In short, small parties supporting BN are contributing to the continuing sufferings of Malaysians.

"With all good wishes. Simon Sipaun."

State Reform Party's deputy chairman, Daniel John Jambun, said, "Had Sipaun been more firm, he could have asked Diana why Dompok is so bent on bringing his own people down by associating himself and Upko with Umno."
Posted by sabahkini.net at 00:16