DON'T BE DECEIVED BY PLOY OF LONERS 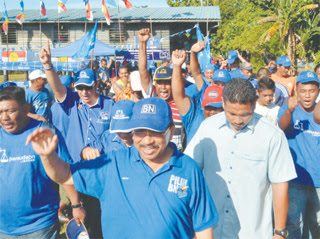 SANDAKAN : Chief Minister Datuk Seri Musa Aman described the acts by Umno and Barisan Nasional (BN) members to contest in the general election as Independents as disloyalty to the party. It is also a very irresponsible action, he said.

"Previously, we have said that whatever the party leadership decides on the candidates, we must abide by," he said when visiting the Sungai Batang polling centre, here, Thursday.

However, these betrayers decided to go against the leadership despite discussing with them.

He said the betrayers have had their membership revoked for life.

Everyone, he said, has the right to become a candidate but they must abide by and accept the decision of the leadership.

He said they should not feel insulted even if they are not selected as candidates.

He said they should emulate several party members who, despite not being selected as candidates, continue to be loyal to the party and supportive of the BN candidates.

On other developments, Musa urged the people not to be easily influenced by the propaganda being spread by certain quarters that voting for Independent candidates is akin to voting for the BN.

He also praised the party's election machinery for its role in ensuring BN candidates win in the election.

On his Sibuga seat, he said the BN is on a good platform. (DE)