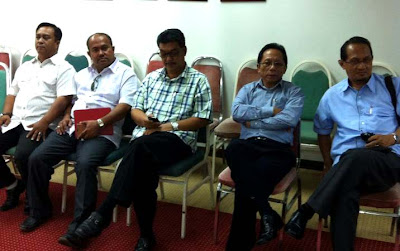 KOTA KINABALU: Sabah PKR was rocked by defections after four division chiefs quit the party, claiming that the party did not respect the promised autonomy to its state leaders.

Mazhry, who led the group said they joined PKR with the belief that local PKR members would be given autonomy to make decisions concerning the party's direction.

"This did not happen, KL PKR was directing everything here'' he told reporters at the state Umno headquarters here.

“Datuk Seri Anwar Ibrahim is nothing but a great debater who can make people believe almost everything he says,” Mazhry said.

Mazhry said he had lost confidence in PKR after realising that the autonomy mentioned in its Buku Jingga' was not going to be observed.

“This is a lie to Sabah PKR members and also to the people who have put their trust in PKR all these years,” he added.
Posted by sabahkini.net at 17:34