THE POLITICIAN, THE BRAND, THE MAN 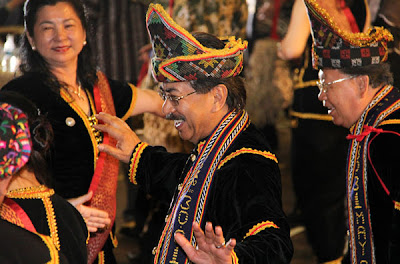 THERE are a total of 358 candidates representing the Barisan National the Pakatan Rakyat, Sabah Star, SAPP and Independents going for 60 State and the 25 Parliamentary seats, all up for grabs in Sabah for the 13th GE on May 5. The interest and the buzz that Sabah elicits when it goes to polls – both from the common people and the media – is obviously unprecedented.

While a state like Sarawak which went to the polls in 2011 attracts attention for its sheer size and the fact that it is politically volatile, Sabah on the other hand has captured the imagination of the people for a decade now due to one very shining personality – Musa Aman.

The hype that has been generated as far as the May 5th 13th general elections are concerned has become manifold because these polls are virtually being seen as a referendum for Musa to continue as chief minister.

So the question being asked now is not whether Musa will win or not and hold CM-ship for a record third time in a row, but how big a margin of victory would it be for Musa.

The central leadership has to seriously work on the development plank so that Sabah regains its past glory of being the richest state in Malaysia including settling once and for all the “Mother of All Problems” – the influx of millions of illegals and they gaining Malaysian identity.

Yes, for Musa, these Assembly elections are not just about winning a third straight term (though Musa becoming CM for fourth time seems just as inevitable).

For the Sungai Sibuga seat where Musa the incumbent is contesting, its a five-corned fight as he faces PKR, SAPP,Star Sabah and an Independent candidate. Upon careful analysis of his speeches and poll campaign, it is evident that he left no stones unturned to stake his claim to be chief minister again and winning the Sungai Sibuga state seat is a foregone conclusion.

While on the one hand he has been unresponsive as far as accusations of the state opposition leadership are concerned on the issues of development, illegals, drop in palm oil prices and so on, he has been relentlessly working hard with Najib Tun Razak at the Centre – be it the Royal Commission of Inquiry (RCI) on Illegals, security, poverty reduction, price rise or inflation. The message that he obviously wants to send to Sabahans is apparent – he is the right man to lead Sabah.

People who have followed the incumbent Chief Minister of Sabah for years can vouch for the major personality change he has undergone  – Musa has gone from being a politician to a BRAND. From his well deliberated speeches to his carefully tailored suit and to his social media savviness (Facebook, Twitter or the blogosphere), Musa and his managers have managed to carve a larger-than-life image of him.

With an apparent lack of emotive issues in the present edition of the polls, Musa has made a bid to woo the so called “neo-middle class”, promising  security and peace and houses and made them central to his game plan.

He also promised urban housing for low income groups and jobs for youths with an eye on the 30 percent population which lives in urban Sabah.

This was also aimed at neutralizing similar proposals made by the Pakatan Rakyat Sabah and local opposition parties. Clearly Musa is out for the kill in the run-up to the most keenly watched elections in recent times and what was being described as his toughest electoral battle till now.

The man’s personal integrity is said to be above board, having said to have no tolerance for corruption, be a workaholic and made development and progress his mantra throughout his governance. His subordinates have also claimed he is not arrogant and not dictatorial and one who can accept dissent and disagreement in his scheme of things.

Musa has been infallible from the start and had an air of self-confidence around him, there were no setbacks in the run-up to the polls. The man may leave many exasperated at times, be it members of his own party or the fragmented opposition in Sabah but his demeanor remains unflinchingly calm.

Post Script: Musa Aman may project himself as an administrator par excellence with sharp political skills who appears to be a superman. But at the end of it all he is also a human being with his own worries and fears though he may not show it. The foremost apprehension that must be on his mind is whether he can retain two-thirds of the assembly seats successfully and fulfill his next ambition.
Posted by sabahkini.net at 13:29