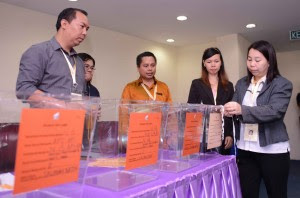 KOTA KINABALU: Postal voting started in Sabah Thursday and will continue until 5pm Friday. Officers in charge of getting the ballot papers sealed in envelopes from various stations in the state were seen waiting for their turn to get them from election commission staff and the assistant returning officers.

In Penampang, a total of 588 ballot papers were prepared for policemen at the Kepayan police headquarters and 29 for those in the Moyog constituency.

Assistant returning officer for the Penampang parliament Marjorie Divioh Bantoi said they have prepared everything and are ready to be received by postal voters.

Media were however not allowed to take photos of those casting their votes in the Kota Kinabalu City hall.

In Kota Kinabalu, City Hall staff involved on polling day for the Kota Kinabalu and Sepanggar parliamentary constituencies cast their votes at DBKK, from 8am to 5pm Thursday.

Present there to observe the preparations and voting was DBKK City Planning Director, Alijus Sipil.
Alijus however declined to disclose the number of City Hall staff who are involved in the postal voting.

Besides observers from the various political parties, two police personnel were also stationed there.

Those eligible for postal voting were the army, policemen, media practitioners and election commission machinery.