GIVE PROOF OF KILLING OF 35 GUNMEN 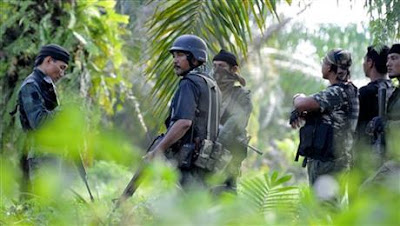 KOTA KINABALU: STAR has challenged caretaker Defence Minister, Datuk Seri Dr. Zahid Hamidi to give proof that 35 terrorists have been killed by the Philippines security forces in Sibutu Island on nomination day.

STAR's State chairman, Datuk Dr. Jeffrey Kitingan said in a statement here that the denial by the Philippines that such a thing ever happened raises a lot of doubts in the minds of Malaysian people about the veracity of Zahid's claim.

"He seems to be quoting only Malaysian sources there is no corroborating evidence from any outside sources," Jeffrey said.

"So what is really happening? Is Umno again resorting to scare tactics to connive and frighten the people into voting for the BN? Is this an additional feed to add on to the Prime Minister's words that only the BN can provide defence for Sabah?"

Jeffrey claimed that the security or insecurity position today, and the imposition of Esszone are the results of the failure of the BN government to take quick and decisive action against the intruders.

"Why?  Because, it was reported that many of them were Suluk Umno members led by a Suluk Umno branch chief," he pointed out.

"Part of their claim for the restoration of their lands were affirmed by the locals claiming that their land were also 'taken back' during the Felda FGVH listing as these lands were within the Felda land titles although Umno leaders had promised they would be given to these SulukUmno members.

"Let's not forget that the Sulu military personnel were trained in Sabah and armed by the Malaysian government in covert operations.  The problems were compounded by the giving of unwarranted ICs to these foreigners.”

"These Filipino Suluks were the vote-bank for Umno/BN but it was rumoured that their votes for GE13 will not be for Umno unless their lands were 'returned' and their monetary dues for their votes for GE 2008 were fully settled.

As a result of the breakdown of the Umno/BN negotiations with the Sulu gunmen/Umno members, the BN government have no alternative but to hit the Suluks hard and drive them away lest Umno wish them to vote for the opposition.

"As for opposition leaders being involved, the Minister should name them if he has the proof and take action against them in accordance with the laws. Otherwise, the caretaker minster should refrain from making irresponsible and sweeping statements against the opposition and lying to the people especially in Sabah.

"The caretaker minister should more specifically reply, notwithstanding his accusations, the reasons and rationale for the Sulu sultanate and their representatives being invited and attending the Umno General Assemblies and photographed meeting and dining with the PM Najib and other Umno leaders.

Is it that the Umno that is involved with the Lahad Datu intrusion which is well supported by evidence but now being played as a political game and the buck being pushed to the opposition and the opposition being blamed without any basis.

"The security of Sabah and the safety of Sabahans are grave and serious matters and should not be made into a political football by the Minister and the Umno/BN governments," he said. (STAR Media)
Posted by sabahkini.net at 06:37