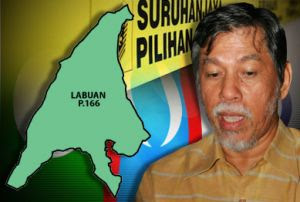 CONFLICT....Political sources in Sabah believe that Ibrahim Menudin, a former Sabah Umno treasurer, is not a popular choice for Labuan.

KOTA KINABALU: PAS has 'pulled out' of the battle for the Labuan parliamentary constituency, leaving the seat open to a straight fight between Barisan Nasional’s Rozman Datuk Isli and PKR’s Ibrahim Menudin.

Hadnan and Ibrahim had both filed their nomination papers last Saturday for the May 5 election.

A disappointed Hadnan said that he accepted the leadership’s decision.

But sources here believe that Ibrahim, a former Sabah Umno treasurer, has already lost the support of PAS in Labuan.

“PAS has been active in Labuan for a long time. PKR is hardly here. In fact, DAP is more active.

“PAS was very sure of the seat. Members feel they have been wronged. Also, they don’t like Ibrahim. They don’t trust him,” said a political observer here who is a frequent visitor to Labuan.

Hadnan’s heavy insinuations to the media were also revealing.

Following the announcement yesterday, he said: “We started our work as soon as the 12th general election was over, but now we are ready to sacrifice, [not contesting] here for the sake of our relationship within Pakatan.

“Therefore, we hope our friends in Pakatan will accept and respect this decision,” Hadnan said, adding that the Labuan PAS’ decision “not to continue our conflict [with PKR]” showed that the members were “loyal and obeyed” their party leaders.

PAS has been eyeing Labuan, a hub for offshore banking and a duty-free island, for years, having contested and lost three attempts at elections.

In the months preceding nomination day, DAP has also expressed an interest in the seat but backed down once told that the coalition leadership had agreed in 2011 to let PAS contest the seat.

A confident PAS was hoping to win the seat with DAP and PKR lending their support in the 13th general election.

PKR leadership, meanwhile, believed that Ibrahim, 63, a corporate figure who rose during the Mahathir regime, was more suited to take on BN in view of the island’s characteristics.

The swap with PAS involved PKR having to relinquish its demand for three state seats in Terengganu in exchange for Labuan, Sungai Acheh in Penang and Panti in Johor.

Meanwhile, Rozman, the BN candidate in Labuan, has urged the disappointed PAS community to back his candidacy.

“I hope PAS supporters would vote us as BN’s struggle is far better and more reliable than PKR’s.

“I believe they [PAS supporters] have their own principles and they know how to evaluate PKR as they are in the same coalition,” he told BorneoPost. (FMT)
Posted by sabahkini.net at 09:39