WHY BN NEED TO ISSUE MANIFESTO? 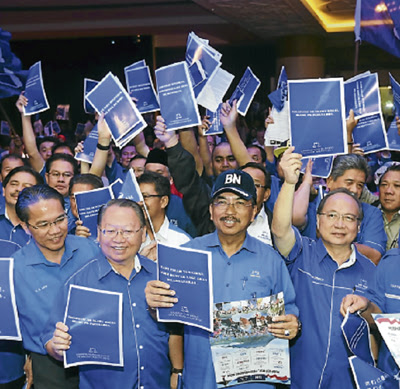 SABAH is a strange and unpredictable state in Malaysia. In the 2008 elections, Barisan Nasional (BN) won almost every seat in Sabah except for one parliament seat out of 25 and one state legislative assembly (DUN) seat out of 60. The people of Sabah gave their trust and almost every seat to BN but what has the BN government done for the Sabahan in return?

For starters, Sabah was the 'Kingmakers' of 2008 election for BN, but was not given a fair share of minister posts in the Federal Cabinet despite having won 24 out of 25 Parliament seats under Abdullah Badawi. When Najib took over as PM, not much had improved for Sabah in the federal cabinet.

Why does the BN government need to issue a ‘manifesto’ – a public declaration of intent, proposed policies, aims and so forth? Does this mean to show that they have not done anything much to keep their promises as stated in their manifestos in the last five or fifty years and that they are still intending and aiming to put the same policies to work on as in the last few elections? It seems that the manifestos are still the same with a little touch of cosmetics to make them look different.

Sabah and Sarawak saved BN from the political 'tsunami' of March 8, 2008 in West Malaysia. BN had continuously promised projects for Sabah on every election and with this election the same promises have been repeated. It has now become a full-throated demand in parliament by Sabah Members of Parliament as part of the larger thrusts to end the discrimination, marginalization and discrimination of the people of Sabah from the mainstream of Malaysian national development and projects.

How many five-year terms do they need to make good on their promises? These promises are still the same as in the past fifty years. Are they saying to the people of Sabah that promises are meant to be broken? Fifty years of half-baked efforts just to draw in the quota to form the same government that keeps making and breaking promises.

While the lion share of the allocations is spent in continuously improving the infrastructures in the Peninsular, the same cannot be said of the other two partners in the formation of Malaysia whereas the lion share of the funds come from Sabah and Sarawak. Where is the equality and fairness in the composition?

We are now in the mid-term of the 10th Malaysia Plan. How many projects had the BN government completed to date? Will they ever complete all the planned projects even if they are given another five years? Your guess is as good as mine!

We wish the people can make changes in the 13th General Elections so that we will have a new government who will ascertain that positive development can take place to ensure that Sabah will be at the same level of development as West Malaysia.

In Penang and Selangor, PR has proven so many positive results in just five years from 2008, and that we can achieve what we have told the people. The auditor general can attest to the fact despite some of our critics in the state opposition who “disagree for the sake of disagreeing”. The people of Malaysia must come out to vote for a change in government, governance and the way things are being done.

In the run up to the 13th General Elections, Hiew King Cheu, the DAP candidate for DUN Luyang seat will be coming out with a series of articles to point out where and why the BN government has failed the Sabahans. Do you want BN to continue for another five years? (DAP Media)