NAJIB WILL FULFIL HIS PROMISES 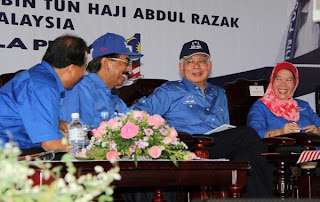 By : ELAINE MAH AND FIZAH YUSOF

THE PRIME Minister is committed to the people. This is the message that Chief Minister Datuk Seri Panglima Musa Aman conveyed to a gathering of almost 5,000 people at Kuala Penyu today.

“Every programme that he launches is toward helping the people,” Musa said in his speech at the Sabah Foundation Roadshow launched by Prime Minister Datuk Seri Najib Razak.

According to Musa, during Najib’s tenure as Prime Minister, he has approved a great many development projects in the State. This includes the building of the Sitompok Bridge in Kuala Penyu.

The 1.2-kilometre long Sitompok Bridge cost RM60 million and is fully funded by the Federal Government. The proposal to build a bridge across the Sitompok River began as early as 1993, and was finally approved in 2008.

When he took office in 2009, Najib approved the RM60 million funding for the bridge. Construction began the same year and was completed in 2012. The bridge benefits more than 20,000 people from 56 different villages.

COOMPLETED....The 1.2 km Sitompok Bridge. It is currently the longest bridge in Sabah.

Musa also added that Kuala Penyu has a large potential to become a tourist destination in the State. However, to develop the town, the state needs help from the Federal Government to provide funding for infrastructure development.

“It is therefore important for us to ensure that our (Barisan Nasional) candidates win in the elections. Come 5th May, I hope that you will vote for the BN,” he said. (Insight Sabah)